Archmage of the Silver Cities
First of the Circle

Zehir is a hero in Heroes of Might and Magic V.

Excitable, headstrong, and energetic are the sorts of words the older Mages use to describe Zehir. He chose to master elemental magic, figuring (correctly) that if he could control beings as fickle and powerful as elementals he would be well prepared for any magical struggle.Though the title First of the Circle was granted to the young Mage in the hopes of staving off political infighting during a crisis, the other wizards of the Circle quickly realized that it was only a matter of time before Zehir's skills surpassed theirs - time that is more likely to be measured in months than in years.OffBck

Zehir is the son of Archmage Cyrus and Nadia. When Markal defeated the Leauge of the Silver Cities and killed Cyrus himself, Zehir went into hiding until the necromancers' power diminished enough to banish them away. When Zehir captured Al Safir and defeated the Necromancers, an Elf named Gallan from Irollan came to him with news - Queen Isabel would give birth to a Demon Messiah unless Zehir intervened. Zehir came to the Holy Griffin Empire and, with help of Godric Unicorn and Findan, killed Markal and avenged his father's death. Afterwards, they met Raelag and Shadya on their way to the Queen. When the Queen was defeated, Zehir's ritual was disrupted by Biara. Zehir used the Heart of the Griffin to come to Sheogh, and with the help of his allies, defeated Kha-Beleth and saved the Queen.

He went to the place where Cyrus, his father died. He thought by the text Narxes found his father was still alive. He eventually found his father, but in truth it was Markal, who bound his life to the Ring of the Unrepentant. Zehir slew the necromancer and had no choice but to lead the Silver Cities.

During the orc rampage, Gotai and Kujin came to Shahibdiya and met Zehir. Zehir gave them the Staff of Kunyak and they accepted the gift, promising to meet him at Talonguard. Zehir went to re-unite with his old friends, but saw most of them had died, and met with their successors instead. He defeated a clan for Ylaya, banished illusions of demons in the Holy Griffin Empire for Duncan and Freyda and took Wulfstan to the place where Arkath first appeared to the dwarves. With his new alliances, he joined his friends and attacked Talonguard. He was glad that they defeated Biara and went back to the Silver Cities.

Zehir is a Wizard.

Zehir appears in Heroes of Might and Magic V and its add-ons, Hammers of Fate and Tribes of the East. 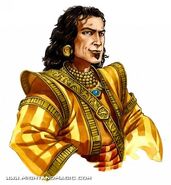 Add a photo to this gallery
Retrieved from "https://mightandmagic.fandom.com/wiki/Zehir?oldid=150463"
Community content is available under CC-BY-SA unless otherwise noted.