Cult of the Spider Goddess

Zakera is the daughter Vein and Anastasya never had. Vein was a Windsword captain when he saved a human child: Zakera. All Zakera's family had been slaughtered by Sandro and his minions. Vein took pity on her. He brought the young orphan to his lover Anastasya to be raised within the Cult of the Spider Queen. Zakera wishes only one thing: to complete her destiny and become the rightful daughter of her "mother" and "father", becoming a vampire. Zakera virtues are her pride and her strong will. She hasn't yet forgiven Vein, his "father", for having abandoned her and her "mother" Anatasya.OffBck

Zakera has only one memory of her childhood that is her own, that of the Netherlord Sandro's face and the certainty that he destroyed her family. Her foster parents, Vein and Anastasya, both implanted memories from their own childhood to give the girl the sentiment of love, and saved her from becoming a sociopath, an assassin. Despite this, Zakera chose to drink the Namtaru's venom to become a Vampire. She intends to use her new powers to hunt down Sandro and all his followers.OffBck

Zakera was saved by Vein from her untimely death when she was a child. Together with Anastasya, they raised her as her parents. When Zakera was old enough, Anastasya initiated her into the arts of necromancy.

Zakera is a bone guard. 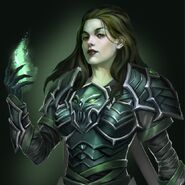 Add a photo to this gallery
Retrieved from "https://mightandmagic.fandom.com/wiki/Zakera?oldid=156773"
Community content is available under CC-BY-SA unless otherwise noted.