Alive (as of Heroes VII

Yrris is a character featured in Shades of Darkness and Might & Magic: Heroes VII.

Hot-tempered, proud and feisty, Yrris has been leading a squad of skirmishers for years. Her shadow warriors operate behind enemy lines, assassinating, sabotaging and spreading terror. Yrris does not approve the current leadership of the Dark Elves. This independence of mind is a trait shared by Raelag, and so he and Yrris became friends.
Over the years, Yrris has become somewhat cynical. She has lost any kind of hope for the future of the Dark Elves. Despite her doubts, she believes Raelag’s crazy plan to recover the Library is maybe the only way to save their people. It’s time to stop running and make a stand.
Her frankness and outspokenness mean she is able to refocus conversations on what really matters, and thus take the heat out of a tense situation.OffBck

Hot-tempered, proud and feisty, Yrris has spent many decades leading a squad of skirmishers, operating from behind the enemy’s lines, assassinating, sabotaging and spreading terror in their ranks. After the unification of the Dark Elf clans, Yrris remained loyal to Menan, the current ruler of Ygg-Chall, although she cannot shake a confused feeling he is not the leader she has been waiting for.OffBck

Yrris is a Shadow Slayer.

Yrris is a Shadow Slayer.

Yrris appears in Shades of Darkness and Might & Magic: Heroes VII. 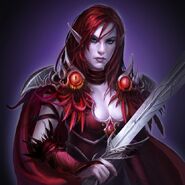 Yrris's portrait in Shades of Darkness
Add a photo to this gallery
Retrieved from "https://mightandmagic.fandom.com/wiki/Yrris?oldid=112325"
Community content is available under CC-BY-SA unless otherwise noted.