ca. 1000s or 1100s AS
Yog is a major character in the Heroes of Might and Magic series and the protagonist of Heroes III: The Shadow of Death. Regarded as a "living contradiction", he is half-Human and half-Genie. His paternal warrior instincts outgrew his magical aptitude, and he became a freelance hero in Krewlod, eventually going on to thwart the schemes of the Necromancer Sandro.

Yog studied for many years with the Wizards of Bracada, but he was often found reading texts on war rather than those on magic. The Duke of Krewlod offered him a military command, allowing Yog to happily use his knowledge of war.OffBck

Yog is a living contradiction. He may have the blue skin of his genie mother, but he has the battle fury and strength of his Barbarian father. At one time, he considered following his mother's path and embracing a life of magic, but his passion for warfare proved stronger.OffBck

Born at the end of the 1000s AS as the son of a Genie enchantress and a Barbarian chieftain, Yog was enrolled in the Calarnen Academy of Magic at a young age. While the Bracadan Wizards who ran the school on the Krewlod border made every effort to teach him discipline and magic, Yog found academy life to be "excruciatingly boring" and was often found reading texts on war rather than those on magic. Sometime during his lengthy tuition, Yog fell in love with another student - Vidomina, a bookish young human alchemist.

However, later events shattered Yog's perception of magic for good. Vidomina spent her time scouring the libraries for tomes of arcane lore. At some point, she discovered a cursed manuscript and studied it against the advice of her teachers. Its evil glyphs transformed her into a Necromancer, and she was cast out of Bracada for disobeying the High Laws of Magic.

Vowing never to study magic again, Yog received an invitation from Duke Winston Boragus of Krewlod to join his army, who was desperately seeking foreign recruits. Yog packed up and left Calarnen, sending one of his sparring partners south to find a town from which he could fight his way to Krewlod. Finding the village of Padon, Yog mounted a defence against Aine, a Calarnen teacher determined to prevent him from leaving Bracada.

After Aine's defeat, Yog crossed into Krewlod, fighting past a heavily guarded border garrison. Pushing onward towards Boragus, he captured the town of Groa and headed for the capital of Ulgak. However, as he progressed, Boragus's forces turned against Yog and began attacking his forces. Furious, the half-Genie finally reached the capital where Winston Boragus explained that the attacks had simply been a test to determine Yog's strength and determination.

Getting to Krewlod wasn't the end of Boragus's trials, however. To prove his readiness to part with Bracada, Yog was given the mighty Angelic Alliance sword and told to distribute its components among a number of seers throughout Tatalia, Erathia and Bracada. Seeking out a recluse named Alendora in the marshlands of Tatalia, Yog fought his way through local armies to deliver the Armor of Wonder and the Sandals of the Saint.

Afterwards, he travelled east to Erathia with the remaining four parts of the Alliance sword, and, after defeating some nearby Knights, presented the seers Falor and Terwen with the Celestial Necklace of Bliss and the Lion's Shield of Courage. His last test looming, Yog then travelled south to Bracada where he was pitted against Aine once again at the border.

Yog got past Aine's forces and slipped through to Bracada where he delivered the Sword of Judgement and Helm of Heavenly Enlightenment to two seers named Beleg and Orruk. Returning triumphantly to Krewlod, Yog was heartily welcomed into Duke Boragus's horde, finally proving that he had given up magic forever.

After serving in the horde for a time, Yog travelled to the Contested Lands, having heard rumours of Necromancers harvesting peasants throughout the area for their armies. Yog found and defeated these Deyjans, and soon met a fellow Barbarian named Crag Hack in the Erathia region also seeking to destroy Necromancers. Crag, however, was seeking out a Wizard named Sandro who cheated him out of four artifacts, having promised him wealth and land.

Yog and Crag Hack further investigated the necromantic plots in the region, soon learning that a Ranger and a Druid from AvLee were also ploughing through the Necromancer armies from the north. Yog sent a message to the two, Gelu and Gem, seeking a co-operative alliance between the Krewlish and AvLeean armies in destroying the undead armies. They agreed, and the four leaders met on the plains of Bragden.

Gelu, Gem and Crag Hack, Yog learned, had all been duped into collecting powerful artifacts for Sandro, who was in fact an Enrothian Necromancer seeking to dominate Antagarich from his base in Deyja. Unluckily for them, Sandro had been sent by King Finneas Vilmar to invade Erathia and AvLee, routing their armies. As Sandro was far too powerful to combat, the four heroes fled west in the wake of his forces.

Yog then decided that the heroes would need an artifact of their own, and suggested that they seek out the pieces of the Angelic Alliance once again. As Gem and Gelu reclaimed three parts which had made their way to two lords on the tributary of the Shandar river, Yog and Crag Hack recovered the other three from a group of Barbarian brothers in the Erathia-Krewlod borderlands. With the artifacts in their possession, the four heroes marched on Sandro's territory.

With the power of the Angelic Alliance at their disposal, Yog, Gem, Gelu and Crag Hack cleared a path of destruction through the undead legions of Deyja, eventually making it to Sandro's citadel itself. They defeated Sandro in battle, but the Necromancer teleported away before he could be finished off. However, the four heroes claimed his necromantic artifacts, and decided to part ways with some of the artifacts each in order to dispose of them by scattering them throughout the world.

Some time after the Restoration Wars, Yog eventually wrote a lengthy tale of his experiences during the War of the Unholy Alliance. The war was previously unknown on a wide scale and Yog sent his story to the Wizards of Bracada in the hopes that history would record it. Judging from a quote relating to Sandro's defeat in this war from Gauldoth Half-Dead in Heroes IV, it seems that Bracada made Yog's story known throughout Antagarich.

Yog also participated in the Festival of Life on the side of house Telez. However, house Telez was defeated by Kilgor, another aspiring Barbarian, who went on to kill Duke Winston Boragus and claim the throne himself. It is unknown whether Yog served Kilgor after this event, though it is likely that he didn't, due to his unwavering near-decade-long loyalty to Boragus.

A few years later, Yog would survive the Reckoning and cross through a portal to Axeoth along with thousands of other refugees. He has since resided on the continent of Iranese.

Yog is a Barbarian.

Yog is a Barbarian. He starts with basic Offense and Ballistics.

Yog is a Wizard. He starts with basic Tactics and Offense.

Yog is a Barbarian. 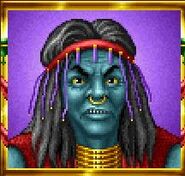 Yog, in Heroes of Might and Magic for Game Boy Color
Polski Русский
Community content is available under CC-BY-SA unless otherwise noted.
Advertisement