Once captain of the honour circle of Queen Tuidhana herself, Yeshtar was one of the first Elves to meet a Faceless, and was invited to spend twenty years of her life learning from them in the darkest places under Ashan. This apprenticeship made Yeshtar a terribly efficient assassin—but, some say, at a great cost to her sanity.
A little shady, intelligent, with sarcasm sharp enough to stab out someone’s eye, Yeshtar only accepts one form of payment: dream shards. Her clients must be ready to share their purest and strongest feelings, which she crystallizes for her collection.
But they can in return court on Yeshtar’s unswerving loyalty. She will remain fiercely dedicated to her mission and will never betray her employer.
As for her ultimate purpose, nobody has yet managed to pierce her secret. Some say she still has one final mission to accomplish, and she is just biding time until the moment comes when she can keep her promise to the late Queen Tuidhana.
OffBck

Yeshtar can be found in the dark elf camp on the forth floor of the Tomb of a Thousand Terrors. An assassin who collects dreams and memories from both vicitms those she trains, she slyly tells the raiders that she would kill them if anyone was paying her to do so. (Fortunately, no-one is.)

A master assassin, Yeshtar, also known as the Black Whisper, only accepts one form of payment: dream shards. Sad dreams, joyful ones, she only accepts to kill if the client is ready to share the purest and the strongest sentiments, which she then crystallizes for her collection. She is loyal to her current employer, but will never tell you his name. As for her ultimate purpose, not even the clan could pierce her secret. Some say she is just biding time until the moment comes when she can keep her promise to the dead Queen Tuidhana.OffBck

In "Yeshtar's promise" scenario she makes allies with Blades of Erebos and tries to kill Brendan Falcon. Believing, that this is Tuidhana's will, she takes Flammschrein and kills angel Sandalphon to take a boy. Later she notices that Tuidhana asked her to forgive humans and elves for the War of the Bitter Ashes, not to take revenge on them. Vayaron poisoned Yeshtar's Dream Shard and made her believe that she must destroy Brendan. In fact, this was another manipulation of him to reach his evil goal.

She will train Dagger to the grandmaster level for a “price”.

Also, if the Raiders have obtained the Dream Shard from Dunstan's body, she offers to let them explore his memories (a special optional dungeon that gives them a view of the history surrounding the plot) so long as she gets to keep the Shard afterwards, but warns them of the potential danger involved. (They can do this whenever they choose, but because Yeshtar keeps it, the dungeon is only explorable once.) 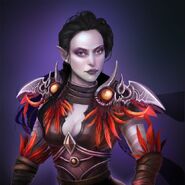 Yeshtar's portrait in Shades of Darkness 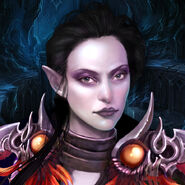 Yeshtar's prerelease portrait in Heroes VII
Add a photo to this gallery
Retrieved from "https://mightandmagic.fandom.com/wiki/Yeshtar?oldid=151433"
Community content is available under CC-BY-SA unless otherwise noted.