Leader of the Kreegans

A few months after arriving on Enroth during the Night of Shooting Stars, Xenofex managed to capture King Roland with the aid of a treacherous mage, Sulman. When Queen Catherine had to return to Erathia to attend her father's funeral, Xenofex thought the time was right to take down the Kingdom of Enroth.

"The people have begun to sense that something is wrong, that perhaps the gods are angry. That perhaps... the Ironfists have lost the Mandate of Heaven. Just a few more disasters and there may well be a full-scale rebellion!"
—Xenofex

Xenofex also founded the infernal Cult of Baa, hoping that the cultists could weaken Enroth from within.

The Cult of Baa, as well as the other kreegans on the continent of Enroth, were defeated by the Heroes of Enroth.

Though Xenofex's plans on the continent of Enroth were ruined, Roland was still his prisoner, and Xenofex still ruled Eeofol. Roland spent six or seven years in Xenofex's dungeons.

The Lords of Harmondale, during their quest to gain entry to the spaceship known as The Lincoln, were sent to rescue Roland and eliminate Xenofex. They entered Colony Zod, Xenofex's base, and killed him.

On the night that Xenofex was slain, he appeared to Lucifer Kreegan in a dream. He revealed which artifacts he would need to gather in order to construct Armageddon's Blade, and also showed him Khazandar, the smith who could forge it. He then showed him the effects of the blade:

"In an instant, a flash of white blinded me. My vision returned in time to see the blade conjure an ocean of fire to wash over the world. These waves of fire spread, fast as lightning, burning all in its path. When it was over, Xenofex and I stood face to face, on a world charred black. Examining the face of Xenofex, I saw only satisfaction and glee."
—Lucifer

Lucifer sent Xeron out to construct the blade, which led to the start of the Demon Wars.

He can be found in Colony Zod, and is guarded by devil captains. 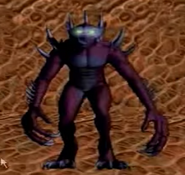