Xana is a character in Might & Magic: Heroes VI and Dark Messiah.

Born the daughter of a great Wizard in the Seven Cities, Xana's life changed abruptly when a fit of jealous rage led her to conjure an Imp into the folds of her cheating sweetheart's robes. Burnt at the stake for the crime of summoning Demons, Xana awoke from her grizzly death as a Succubus in the castle of the Arch-Demon Kha-Beleth, deep in Sheogh. Intrigued by her new life, Xana is content to do her master's bidding. Sweet and sincere and a lover of poetry, Xana is possibly the only resident of Sheogh who never speaks a false word.OffBck

Xana was once the beautiful daughter of a great wizard in the Seven Cities. Alluring and learned in the arts of magic, she grew up with a natural talent for getting what she wanted. But her fortune took a turn for the worst when she found her lover with another woman. A vengeful Xana conjured an imp into the folds of her former sweetheart's robes and was burnt at the stake for her use of black magic. After her death, she awoke in the castle of Kha-Beleth. The Arch-Demon had seen that he might have use for her and claimed her soul to serve him for an eternity. Xana was forged into a succubus, a natural role for her, given her talents. Though intrigued by her new existence and ultimately loyal to her master, she still harbors a desire for freedom.

She first appears as a Succubus in the service of Kha-Beleth. Shortly before the Second Eclipse, he assigned her to assist Kiril Griffin and ensure that Azkaal, the Demon Prince of Destruction, remains imprisoned in his body.

Four centuries later, she was summoned to Ashan by demonist Phenrig and bound to the spirit of Kha-Beleth's son, Sareth. Accompanying him in the quest for the Skull of Shadows, she quickly became infatuated with the young Demon Messiah, flirting with him and making snide remarks about the girl who led the expedition - Leanna.

She is loyal, but her natural desire for freedom and power drives her to not-so-subtly influence Sareth by exploiting the leaks in the bonds that tie her to him.

She is a bit of a free agent and has her own hidden agenda, using her seductive powers to achieve her objectives.

If Sareth chooses to help Kha-Beleth, the demon lord allows Sareth to keep Xana, making the Dark Messiah her new master as a reward for his service. 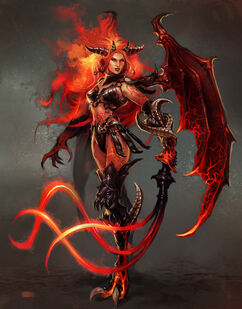 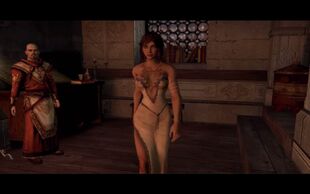 Xana after being summoned 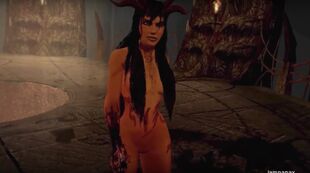 Xana greets her new master in her demonic form
Add a photo to this gallery
Retrieved from "https://mightandmagic.fandom.com/wiki/Xana?oldid=143807"
Community content is available under CC-BY-SA unless otherwise noted.