Wulfstan is a member of the Winterwind clan of Dwarves; he is strong and inured to the extreme conditions of the Dwarven mountains (not many Dwarves venture outside their subterranean cities). His travels in the exterior have also made him friendly with other peoples, a fact that for some more conservative elements is equivalent to being tainted. Having embarrassed the king once too often with his plain language and undiplomatic opinions, he has been more or less banished to the frontier where he is the captain of an important garrison.OffBck

Wulfstan is Rolf's half brother. He is unlike him, as he does not seek power. This proved to be when Rolf wanted to capture Freyda - Wulfstan just let her go. Rolf was very angry and went to King Tolghar to accuse him while Wulfstan was attacking the members of Red Church. Later, Rolf made an ambush for Wulfstan, though he was soon defeated. Later, Wulfstan met his friend, Duncan and together they defeated Laszlo and captured Horncrest. Wulfstan held the town with Duncan against the Red Church. Along with Isabel, Freyda and Ylaya, they went to Tor Hrall, where Wulfstan killed Tolghar.

Because of this crime, Wulfstan went to hiding. Zehir came to help him and went to search for Arkath, though he had to kill Rolf. Wulfstan met him, along with Hangvul, to speak with the Dragon God of Fire. The dragon named him a king and peace was restored in the Stone Halls. Wulfstan came to Talonguard and helped his friends to defeat Biara. When Biara was killed at last, Wulfstan went back to Stone Halls and ruled the kingdom.

Wulfstan appears in Heroes of Might and Magic V add-ons, Hammers of Fate and Tribes of the East. 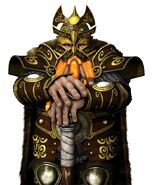 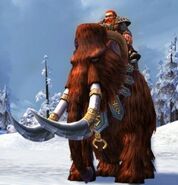 Young Wulfstan with mother
Add a photo to this gallery
Retrieved from "https://mightandmagic.fandom.com/wiki/Wulfstan?oldid=153645"
Community content is available under CC-BY-SA unless otherwise noted.