The whirlpool is an adventure map object in the Heroes of Might and Magic series that can be used to travel to another part of the map. The hero can sail into one whirlpool, and will instantly emerge from another, usually at the cost of some of their creatures.

If the hero has more than one stack of the same tier, only the first one will be damaged. It's therefore wise to split a single creature off from the main stack and place it first in the hero's army, which will allow the hero to travel without creature cost.

In Heroes IV, the whirlpool will take a lower percentage, but from all stacks, not just the lowest-tier one. In Heroes VI, the whirlpool just acts as a transporter, with no creature cost. 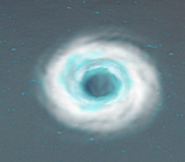 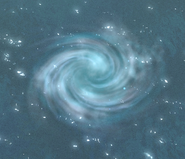