"What a simple mind. He's a prime example of why I have such a hard time trying to conquer the world."
—Kha-Beleth [src]

Veyer is a Demon Lord from Heroes V and Heroes VI.

Veyer is not, to put it mildly, the sharpest demon in Sheogh, but he is well-liked in consequence of being bold, enthusiastic, and easier to manipulate than a pair of bellows. A handy ally for anyone who's in need of a spot of terrorizing or destroying, Veyer is proud to do what Demons do best.OffBck

Veyer was a originally a servant of Demon Overlord of Destruction, Ur-Khrag. He was one of the many Demon invaders during the Second Eclipse ravaging the lands of Ashan. He was eventually captured and imprisoned by the Necromancers. Released by Kiril Griffin, a human possessed by the Prince of Destruction, he accompanied him in his quest. Kiril eventually sent him back to Sheogh, and entrusted Veyer with defending his properties from other Demons.

Around the time when the Demon Overlords vanished from Sheogh, Veyer found a manuscript supposedly written by the missing Archdemons. Having Marbas confirm its authenticity, Veyer he decided to use this knowledge in order to impress Kha-Beleth, the new ruler of Sheogh. He proceed to find the artifacts mentioned by the script and master their power. While he succeeded, he did not realize that in reality the manuscript was prepared by Kha-Beleth and planted for Veyer to find by his own imp servant.

Afterwards, he is loyal to his master, Kha-Beleth, whom he serves, being tasked to retrive the Heart of the Griffin from Nicolai's tomb and later to get Isabel Greyhound to his Master. Unfortunately for him, he was stopped by Agrael.

Veyer appears in Heroes V as a Demon Lord and in Heroes VI as a Chaos Lord. 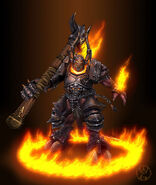 Add a photo to this gallery
Retrieved from "https://mightandmagic.fandom.com/wiki/Veyer?oldid=143538"
Community content is available under CC-BY-SA unless otherwise noted.