Vein is a main character of Might & Magic: Duel of Champions, as well as the protagonist of the Second Necropolis Campaign in Shades of Darkness.

Vein is a very old and powerful Death Knight. He didn't choose in the first place to live the so-called life of the Undead. Belketh turned him to save his family from certain death caused by a magical plague. Vein is the only one who survived. He then spent centuries in Belketh's service and rode alongside the Shadow of Death: Sandro. It was during these years that he earned the title: the Reaper of Souls. When Sandro was discovered to be a Netherlord, Vein hunted him down, killing all of his followers, but Sandro himself was merely exiled by Belketh. Enraged, Vein left the Necromancers for a brief century to become a mercenary captain in the elite brotherhood of the Windswords. Matter of fact, Vein has seen it all and is rarely surprised. He never shows emotion, and when he says yes it means: yes. His words are not calculated: they come from a mind that is at ease with all of the difficult decisions he has made throughout his existence. Though, sometimes, he cannot help from thinking what his life would be, had he died from the plague like his parents, and passed on to Asha to be reincarnated.OffBck

Vein was Anastasya's lover during a ten year period. He adopted a young Zakera and wanted to make a family with Anastasya. But his hostility with Sandro, his former brother-in-arms now nemesis, made Vein leave his family and the Spider Cult, as he grew disillusioned with the cult when Belketh merely exiled Sandro. He then became a captain of the Windswords, and met Crag Hack, the pirate king. He returns to Anastasya and the other necromancers upon her request, and is asked to help defend the city of Nelsham-nadin from the armies of the princess Drew Falcon, who have attacked while the Necromancers are suffering in the grip of a magical plague. Anastasya bids Vein to take Zakera with him to help fulfill her destiny, and to meet with Ludmilla in Nelsham-nadin. Despite his reservations on taking Zakera with him, he respects Anastasya's wishes and allows her to accompany him.

Working with Ludmilla and Zakera, Vein defeats the army's angel scouts, defends against attacks from sea, successfully takes their supply lines behind their army, defeats the Celestial captain attempting to create a portal behind Nelsham-nadin, stops their attempts to rebuild the bridge along Nelsham's Scar, and finally confronts and defeats Drew herself in combat. Anastasya is grateful to hear the news, and collapses on the spot. When Vein wonders why the plague is afflicting her so badly but not him, Ludmilla informs him that, like she, Vein is an older vampire, converted before the discovery of the Mother Namtaru. The plague is affecting those closest to her first, though the ones converted before the arrival of the Mother Namtaru are not safe either, so Vein goes in search of Belketh, to speed along his research for a cure to this plague.

However, despite Belketh's efforts, he is unable to create a cure for the plague, as it is a power that is unlike anything he's seen but has traces of Void Magic. Vein immediately suspects Sandro to be the one behind the plague and demands they find him. Belketh, however, urges him to put his vendetta aside and aid his fellow necromancers, which Vein reluctantly agrees. Knowing that he doesn't have the knowledge of the void and no wizard or otherwise know how to heal the Mother Namtaru, Belketh believed the knowledge they need lies in the Faceless' Invisible Library, located in the Dark Elf capitol, Konos. Traveling to the Dark Elves borders, Vein and his former teacher are attacked by patrols who believe they attacked them earlier, which in reality, was Sandro. A bloodbath was prevented thanks to the Faceless, who saw the truth of Vein's words and granted them an audience. Despite finally reaching the Invisible Library, Vein and Belketh discovered that the Faceless don't remember what was stolen as Sandro used his Void Magic to erase their memories. While Belketh gives up trying to discover what they forgot, Vein remains to find out. Eventually, thanks to his efforts, he discovered that the only way to heal the Mother Namtaru and therefore end the plague was to have it transported to the Spirit World, the realm of Asha's memories, and "remember" all the horrors of the Wars of Creation.

After a long journey, Vein entered the Spirit World with the Mother Namtaru in tow, though much to his displeasure, Anastasya, Sveltana and Zakera joined him. Entering the magical realm and defeating each of the elemental spirits to have the Namtaru "remember" Asha's nightmares, Vein was able to fully heal the Mother Namtaru with the aid of those close to him. However, the Mother Namtaru senses the Netherlord, Sandro, approaching with a powerful Avatar of the Void. Vein was able to defeat the void being and returned to Ashan with everyone else but vowed to find Sandro, thus returning to the Windswords but left Zakera and Anastasya on good terms.

Vein is a very old and powerful Necromancer. He didn't choose in the first place to live the so-called life of the Undead: Belketh turned him to save his family from a magical plague. He then spent centuries in Belketh's service. It was during those years that he earned the title "Reaper of Souls". Haunted by the atrocities he committed as the Reaper, Vein seeks solace with his family: his soul-mate Anastasya and their adopted daughter, Zakera.
During the fall of Al-Betyl, Vein sacrificed his eternal life to give Anastasya and Zakera the time they needed to escape the besieged city. Vein was executed by the Wizards, his soul trapped within his skull to avoid any reincarnation.
Vein's skull was put on a shelf in the Great Library of Al-Jamasht, so that all could meditate on the final fate of the Reaper of Souls.OffBck

Vein is an Ebon Knight.

Vein is an Ebon Knight. 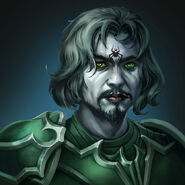 Vein's icon in Duel of Champions

Add a photo to this gallery
Retrieved from "https://mightandmagic.fandom.com/wiki/Vein?oldid=152108"
Community content is available under CC-BY-SA unless otherwise noted.