Uriel is a character featured in Might & Magic: Heroes VI.

A powerful Archangel who fought in the Elder Wars, Uriel has been consumed by a tremendous guilt over the deaths of his mother, Aurora, and his brother, Michael, at the hands of the Faceless centuries ago.
This guilt has led him to develop a deep-seated hatred for the Faceless, and save for his yearning to bring his mother and brother back, the thing Uriel desires most is utter destruction of his ancient enemies.
The Twilight Covenant, a pact signed by all Angels, including Uriel, to end the fighting between Light and Darkness forever, has so far stood in his way.
Uriel, however, has plotted a course around this hard rock by rallying the Celestials, a new generation of Angels born since the pact.
Uriel will have his crusade.OffBck

Uriel is an Angel who fought in the Elder Wars. After losing his mother, he wanted to get her back, so he manipulated Anastasya to kill her father so that she can be used as a hosting body to his mother. He blamed the Faceless for the event and sent Kiril and Sarah to Sheogh, where they would perform a ritual to cleanse the darkness. However, Anastasya learned his plans and defeated him. He came to the emperor and allowed the demons to kill him, as he broke the oath to protect the Griffin family. In his defeat, Anastasya used the same method that he used on her, forcing him to leave himself defenseless against the Demons, getting gruesomely ripped to shreds.

Uriel does not actually appear in Might & Magic X: Legacy, but his actions during the Elder Wars play an important part of the plot; reforms enacted by the Empress Gwendolyn Falcon of the Agyn Peninsula (first and foremost, separating the authority of the church from that of the state, seeing as blindly following an angel was a mistake) cause many of "the more conservative" nobles to object, causing political upheaval and threats of succession, leading to the current crisis.

In the coming centuries, many nobles and citizens of the Empire became wary of the angels, as Uriel's actions broke the trust that was forged between the empire and the angels, now most angels aid the empire unofficially through the Church of Light. Though Uriel intended to use the Celestials and Seraphs to restart the Elder Wars, the empire gained new soldiers and champions. However, as they are the result of the fusion of angel and human soul, the revelation caused great unrest in the empire, but with the reign of Gwendoyln Falcon, instead of answering to the angelic host they answer exclusively to the imperial crown.

Uriel is one of the boss characters.

It is necessary to create a big army in order for the boss to be defeated under some turns, and cannot take advantage of his abilities then. If the boss is defeated, it is over for the fight if he has minions yet.

A Dream Which Was Not All A DreamEdit

The most difficult fight of the mission, because of this worthy to begin the "Master of the Elements" quest with this. The minions may decimate the army, and the boss use a strong, area attack strikes. Unfortunately, the boss' defeat is not worth an end to the fight yet, it is necessary to destroy with the minions.

If Uriel cannot resurrect any of his minions then he will enrage and acts one additional time each turn for the rest of the combat. Cannot be dispelled.OffBck

Uriel is immune to negative effects.OffBck

Creatures can be healed and resurrected. Susceptible to morale.OffBck

Defeat Uriel while killing all minions affected Divine Presence within one turn.OffBck

Let us decrease the minion stacks to so much that the boss should use this ability on all, after destroy them under one turn then.

Uriel is one of the archangels in christianity. 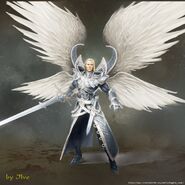 Uriel, plotting his revenge against the Faceless

Uriel, mortally wounded by the Demons during the battle for Falcon's Reach
Add a photo to this gallery
Retrieved from "https://mightandmagic.fandom.com/wiki/Uriel?oldid=157823"
Community content is available under CC-BY-SA unless otherwise noted.