Edit
watch 04:03
Wiki Targeted (Games)
Do you like this video?
Play Sound

This article is about the creature from Heroes of Might and Magic III. For other uses, see unicorn.

The unicorn is the sixth-tier creature of the Rampart faction in Heroes of Might and Magic III. It can be found at the unicorn glade. The unicorn can be upgraded to the war unicorn.

Unicorns and war unicorns have excellent mobility and deliver severe damage with their lancing horn attack. This attack has a 20% chance of blinding an opponent. Both unicorn units project a magic resistant aura which gives adjacent units a 20% chance to ignore the effects of hostile spells.OffBck

With its high stats, the unicorn is a valuable unit in the Rampart army, and should be prioritized. While it can charge ahead and do some serious damage, it is also useful when staying back, sharing its magic resistance with nearby vulnerable units. 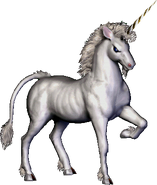