This article is about a Knight of the Ancient universe. For her Ashan counterpart, see Tyris (H7).

Tyris is a female human knight in Heroes III and Heroes IV.

Tyris rose quickly through the ranks of the Erathian Cavalry, not only for her ability to handle a horse, but for her 'sixth sense' regarding mounted strategy and tactics. She has also never lost a joust.OffBck

Tyris has a strong competitive spirit, which serves her well in jousting contests or other games. But she fears losing so much that she will sometimes act brashly in an effort to pull victory from defeat. So far, this risk-taking has worked for her, but some day her luck will run out.OffBck

Tyris is a Knight of the Castle faction. She starts with basic Leadership and Tactics.

Tyris is a Knight of the Haven faction.

A small version of Tyris' portrait shows up when a Stone Gaze of medusae attack is performed (in Heroes IV). 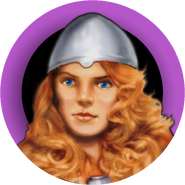