This article is about the creature from Heroes of Might and Magic III. For other uses, see troglodyte.

The troglodyte is the first-tier creature of the Dungeon faction in Heroes of Might and Magic III. It can be recruited from the warren. The troglodyte can be upgraded to the infernal troglodyte.

Troglodytes are immune to blinding effects since they don’t have eyes and ‘see’ their surroundings through infrared senses.OffBck

Troglodytes are immune to the Blind spell, but possess no other special abilities, and are considered average for their level. Their upgraded form, the infernal troglodyte, is more improved in all-round areas, sporting a boost in attack, defense, health and speed.

Though vulnerable, their wider-than-average damage range, combined with their large numbers, renders them susceptible to the Bless and Curse spells.

As of Restoration of Erathia patch 1.1, they are also immune to the Stone Gaze of medusae.

3D render of the Troglodyte 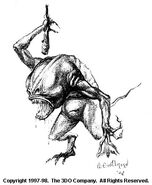