Trial by Fire is the only stand-alone expansion pack for Might & Magic: Heroes VII, and was released on August 4th, 2016. At the same time, the 2.0 patch for the vanilla game was released, bringing the majority of new features of the stand-alone to the main game as well, but not the Fortress faction.

On October 5th 2016, it was announced that development of Heroes VII and its addon has been completed, and as such no further updates would be released. The final version is 2.21, for both the addon and the game.

A second expansion, centered around the Inferno faction, was initially slated for release sometime in 2017 (along with two more DLC campaigns). However, due to lack of interest and mainly negative feedback from the fans, it has been cancelled.

A new threat rises in the dwarven kingdom of Grimheim. Vilma "Stoneshield" Bjornsdottir, the leader of her people, comes to Emperor Ivan Griffin, who fears the new uprising could ruin his newly-forged Holy Griffin Empire.

The expansion features 2 campaigns and 8 maps overall: 6 maps for the Fortress campaign as well as 2 maps for the final Haven Campaign. It also includes two Lost Tales of Axeoth DLC campaigns, with 8 additional maps. The Tutorial has been improved too, and now features a mission and four videos on how to play Heroes. 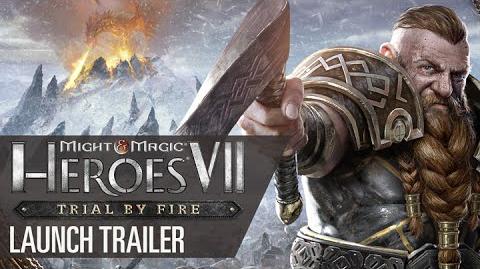 Retrieved from "https://mightandmagic.fandom.com/wiki/Trial_by_Fire?oldid=132652"
Community content is available under CC-BY-SA unless otherwise noted.