In the Wake of Adversity

"When answers are elusive, sleep brings questions we never asked."
—Towards the Within load screen

Towards the Within is the second scenario of the Necropolis Campaign in Might & Magic: Heroes VI.

Anastasya has liberated Jorgen, the man accused by the Holy Falcon Empire for her father's death, as she believes he is innocent. Anastasya is convinced the Mother Namtaru, the Avatar of Asha's Nightmares, can give her clues to unraveling the mystery of all that has befallen her.OffBck

Some time after freeing Jorgen and Elisabeth from the Holy Inquisition, Anastasya finds Jorgen tending to Elisabeth, using his powers as a Faceless to enter her dreams and help her overcome her trauma. Anastasya asks Jorgen if he could help her find her controller through her memories, to which Jorgen asks why she wants to see that which her mind has chosen to forget. Anastasya decides instead to see the Mother Namtaru for assistance, but thanks Jorgen for his help in freeing Elisabeth from her delusions.

Shortly thereafter, Elisabeth wakes up, and is determined to go to find her son, Sandor, who is warring with the Orcs. Haffayad informs Anastasya that they will be leaving in three days, and suggests that she go to meet Sveltana and the Mother Namtaru, requesting that she also escort Kaspar to the High Priestess Miranda as she goes. Kaspar asks Anastasya when she decided to become a Necromancer, to which Anastasya replies that she had little choice in the matter. When Kaspar asks if she was transformed against her will, Anastasya clarifies that she is happy to have been brought back, as she has unfinished business.

Anastasya meets with Miranda and Sveltana, who are in the middle of a heated discussion. Miranda is greatly displeased by the recent turn of events that led to armies of undead attacking the Holy Falcon Empire and stealing away two of the Inquisition's most valuable prisoners, only to have them arrive in Heresh. Sveltana states that these actions were taken because someone is working to reignite the ancient war between the Angels and the Faceless, but Miranda does not think that the Mother Namtaru will be so approving of her actions. Miranda reluctantly accompanies Sveltana to see the Mother Namtaru, with Sveltana telling Anastasya that she will send for her when the Mother Namtaru agrees to see her. In the meanwhile, Miranda asks Anastasya to show Kaspar around.

After a conversation with Kaspar on the dragon-gods and magic, Bluebeak arrives to tell Anastasya that she has been summoned by the Mother Namtaru. When Anastasya meets with her, the Mother Namtaru speaks in cryptic riddles, frustrating Anastasya, who presses the Namtaru to reveal the identity of the entity that controlled her. The Mother Namtaru reacts angrily to Anastasya's impertinence, and Anastasya offers to help stop the suffering of those trampled under the foot of the Empire's crusade. The Mother Namtaru speaks of a daughter of Elrath, given to the spider, and aided by Malassa. Anastasya deduces that she must go to Jorgen for assistance. Jorgen again asks her why she wants to remember what her mind has chosen to forget, and Anastasya tells him that she must find what is responsible for controlling her, be it a man, a demon, or even a dragon-god. Jorgen warns her that fighting demons of the mind is as dangerous as fighting demons in Sheogh, but Anastasya says that even if she loses her soul, at least it was her choice to make. Jorgen then helps her enter her mind to search for the person who controlled her.

Inside the realm of spirits, Anastasya meets a spirit version of her mother, Cate, who states that she is Anastasya's earliest trauma, having left her alone to fend for herself, and that to leave the realm of dreams, Anastasya must kill her. Anastasya objects, but the spirit of Cate advises Anastasya to be true to her heart and departs. Heading forward, Anastasya finds Jorgen, and requests that he take her to the memory of her father's murder. Jorgen informs Anastasya that some memories, mired in sadness or guilt, block her path, and that she must confront them to get through.

First, Anastasya encounters the spirit of her sister Irina, who confronts Anastasya about her jealousy towards Irina. Irina chastises her for her desire to be like others, and encourages her to be herself before they do battle. After defeating Irina in combat and taking her city, Anastasya may either let the routed enemies flee or pursue and destroy them, helping to propel her down the path of blood or tears. Anastasya then meets with Jorgen, who advises her to choose her path before taking her to the next region of the spirit world.

In the next area, Anastasya meets her half-brother Sandor, who offers her a gift in order to win her love, which Anastasya can accept or refuse to bring her down the path of blood or tears. Next she encounters Kraal, trapped inside the Griffin library as it burns. Anastasya is forced to choose between saving Kraal and saving the books of the library, another choice of blood or tears. Finally, Anastasya encounters Valeska, who is caring over a sick infant Anton. Valeska laments her lack of skill as a nursemaid, and pleads to Anastasya to take her place in caring for the child. Anastasya can choose to let Valeska leave or have her stay, which brings her further along the path of blood or tears.

Anastasya moves on to the next area. Here, she asks Jorgen to take her to her memories of her father's murder, but Jorgen states that she must visit her most defining traumas first, those that made her who she is. Advancing north, she finds Anton, who asks if she came to kill another Duke of Griffin. Anastasya insists that the murder was not her fault, and Anton chides her for always shifting the blame away from herself. Anton tells her that she must grow up or die before attacking her. After defeating Anton, Anastasya explores the large, circular area behind him, putting to rest various troubles of the mind. Along the way, Anastasya realizes that this place is a mixture of her mind and the Spirit World, and that she could reach other minds through here, understanding that this was how she was controlled.

At the end of the area, Anastasya encounters her twin brother, Kiril, now a Hellcaller. Kiril says that it is her fault, that he had to do this so that she could remain the nice little priestess of Elrath. Kiril recounts a time when he and Anastasya were flying kites; that Anastasya crashed hers through a window, and that Kiril took the blame instead. Kiril states that she can blame no one for her actions this time, and Anastasya angrily attacks him. Kiril taunts her as Anastasya attacks, and when she defeats him, he transforms into an exact copy of herself. The reflection suggests she looks within, and Anastasya reasons that because she didn't want to grow up, she let herself be controlled because of her weakness, which is what let her be used to kill her father. The reflection takes on the aspect of her childishness, stating that the fault is with the world. Anastasya states that her life is what she makes of it, and that a part of her must truly die here.

As Anastasya heads towards her dream doppelganger, she has a vision of herself standing over her unconscious body, with Jorgen at her side, when Miranda breaks in with a dozen Vampire guards at her side, causing Jorgen to cast a spell. When Anastasya asks what is going on, Jorgen does not respond.

Anastasya defeats her reflection and ends her nightmare. Walking toward the end of the dream, she is greeted by her father and mother. Anastasya is hesitant to see Slava, having dreamed for days about murdering him with her own hands. She apologizes to him for her weakness allowing her to be controlled. Slava says that he forgives her, and that she should forgive herself. Cate advises her to trust her heart, and Anastasya leaves the realm of dreams.

Anastasya awakens on a high cliff in Heresh, with Jorgen looking down into the Ravine below, where Miranda, Sveltana in tow as a prisoner, searches for Anastasya with an army of undead. Anastasya thanks Jorgen for his aid, and resolves to stop Miranda.

Due to the fact that this map never gives any cities to control, and objectives must completed in sequence, the path to take is fairly simple and linear. Anastasya should complete as many optional objectives as she can, in order to further boost her power and the quantity of creatures in her army. Battles should be fought in an effort to minimize casualties, as it is difficult to replace troops when they are defeated.

Anastasya must seek an interview with the Mother Namtaru, the legendary creature her aunt brought back from the Jade Islands. Maybe this Avatar of Asha could unlock the memories Anastasya chose to forget.OffBck

Guided by Jorgen, Anastasya undertakes a perilous journey into the Spirit World to recover her lost memories. She must find the way to the Citadel, the center of her own mind.OffBck

In the Spirit World, Anastasya meets a reflection of her sister, Irina. Anastasya must defeat this illusion in order to progress in her inner journey.OffBck

Anastasya must face her most subtle fears in order to move forward: her fear of ignorance, of loss, of being worthless. Everything in life is about choices... and the same truth applies to the undead too.OffBck

Anastasya must now face her most intimate enemy: her twin brother, Kiril. For what is a twin except a reflection of one's own self?OffBck

Jorgen told Elisabeth to "build a wall" to shield her mind... Maybe Anastasya should do the same thing?OffBck

Anastasya's memory has been fractured into dozens of memory shards. Collecting them all will strengthen Anastasya's grip over the Spirit World.OffBck

Three Meditation Temples are hidden in Anastasya's mind. By visiting them all, she could find the peace of mind and serenity required to complete these trials.OffBck

Somewhere in her mind, Anastasya built a Shrine dedicated to her mentor and lover, the Archangel Uriel. But this Shrine is being threatened by Anastasya's inner demons.OffBck

Some parts of Anastasya's mind seem clouded by dark shadows. Anastasya should locate the source of the shroud and capture it.OffBck 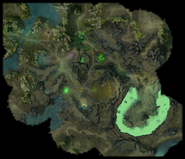 The map of the initial area of Towards the Within.
Add a photo to this gallery
Retrieved from "https://mightandmagic.fandom.com/wiki/Towards_the_Within?oldid=148760"
Community content is available under CC-BY-SA unless otherwise noted.