Toghrul is a hero in Might & Magic: Heroes VI.

Toghrul is a former Orc Shaman who has sold his soul to the Lords of Sheogh.
He has but one aim in life – to destroy the House of Griffin – and he still feels this burning desire just as fiercely as the day he witnessed the massacre of his tribe by Duke Pavel of Griffin. Sick or wounded, elder or child, not a single Orc except Toghrul survived the slaughter.
Consumed with rage, Toghrul opened a gate to Sheogh and called for the Demons – traditionally the Orcs’ most bitter enemies – to avenge his tribe’s death.
The Demon Prince Ahribban took up Toghrul’s cause with partial success: Pavel was killed, but his young son, Slava, survived the onslaught.
This didn’t satisfy Toghrul, and to this day he will do anything to achieve vengeance.OffBck

Toghrul is a Warlock.

Masfar appears as a hero card. He is the leader of the Stronghold faction. 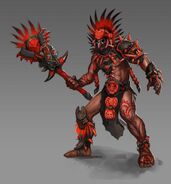 Toghrul as a Storm Caller 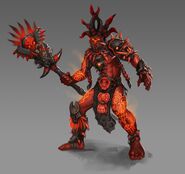 Toghrul as a Warlock

Toghrul's portrait as a Storm Caller

Toghrul's portrait as a Warlock

Toghrul in-game, prior to becoming a Demon
Add a photo to this gallery
Retrieved from "https://mightandmagic.fandom.com/wiki/Toghrul?oldid=149641"
Community content is available under CC-BY-SA unless otherwise noted.