Hero of Irollan
Dragon Knight
Sage of the Dragonmist Islands

A serious Druid who believes unquestioningly in the good of his people, Tieru is appreciated for his loyalty and dedication. He believes firmly in doing what is right, and trusts that Sylanna will give him warning should he stray from the true path. Atypically for the Elves, Tieru has been known to view the wider world, and not merely the forests of his homeland, as worthy of protection.OffBck

He was a ranger and a fighter in the Day of the Tears of Fire. He fought against the dark elven cousins, as they burned Brythigga and killed Arniel, King of Irollan. Tieru fought back and defeated them. However, his friend, Ergal, was a demon and he was truly behind the trouble in Irollan. He convinced the elves (in his disguise) Tieru was mad and disappeared Tieru's wrath. Tieru was angry and was banished, but found the Order of Dragon Knights and joined them.

He took an oath to defeat the demons' plans. With that in mind, he crafted the Heart of the Griffin to aid King Alexei. However, he was killed, so Tieru infused the Heart with a part of his soul.

Tieru had to intervene when Raelag took the Heart of the Griffin from Nicolai's tomb. When hearing Raelag opposes Kha-Beleth, he told him to come to him to see what can be done. Raelag accepted the task and sailed to the Irisus Sea, to Tieru's island. Tieru purged him of demonic magics via the Rite of True Nature and sent Raelag back to Ygg-Chall.

The Archipelago: Tieru tells Findan to get the scroll from Biara.

The Decoupling: Tieru accompanies Raelag to find the Demon Messiah.

The Days of Fire: Tieru recalls to Raelag his role in the war of the Days of the Tears of Fire.

He is a Druid Elder and will share his knowledge with others if they prove themselves worthy. 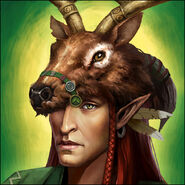 Tieru's prerelease portrait in Heroes VII
Add a photo to this gallery
Retrieved from "https://mightandmagic.fandom.com/wiki/Tieru?oldid=158868"
Community content is available under CC-BY-SA unless otherwise noted.