Might and Magic Wiki
Register
Don't have an account?
Sign In
Advertisement
in: Incomplete articles, Warlords of the Wasteland characters, Conquest of the Underworld characters,
and 9 more
English

Warlords of the Wasteland

The Wastelands
The Ancestors

ca first or second century AS

Tarnum is the main protagonist of the Heroes Chronicles series.

Being raised as a Barbarian, Tarnum never gave up hope and always fought to the last. When he heard a story from a bard about the Barbarians' legend, Jarg, he was even more decisive to free his own people, so he slayed his clan lord, Rabak and became the outlawed Barbarian King.

Afterwards, he pursued the Wizard-Kings of Bracaduun for enslaving so many people. On his quest, he met Hardac, who became his trusted friend and advisor. During his rising of power, a Wizard-King named Kurl imprisoned 4 bards who held knowledge of Tarnum's people. However, the eldest was slain, but others were freed.

To gain the power against Bracaduun, Tarnum fought war against the tribes of Mudlands, which he defeated with little resistance. With the combined forces of the Mudland tribes and his Barbarian Horde, Tarnum's armies overtook the Wallpeaks, the series of Knight Castles bordering Bracaduun.

Tarnum was trapped with only half of his forces after the Wizards brought down a rockslide on his army in the Wallpeaks. After conquering the outskirts of Bracaduun territory, Tarnum pushed farther into wizard territory, mercilessly killing peasants forced to fight under Bracaduun.

Later, after murdering his captains in his descent into madness, Tarnum managed to lay siege to Steelhorn. It was a decisive victory, and with the fall of the Wizard empire Bracaduun was shattered, with many smaller nations formed out of its remains.

Erathia, a human nation formed out of the ruins of Bracaduun, led by Rion Gryphonheart, managed to slay Tarnum in single combat after a short war and vanquish the Tyrant's barbarian empire.

Tarnum was deemed unworthy by the Ancestors of entering into Paradise because of his evil deeds as the Barbarian King. This sets the overarching plot for the rest of the Heroes Chronicles campaigns.

Tarnum appears as a Barbarian in some campaigns. In others, he is a Knight, Wizard, Beastmaster, Ranger and Overlord.

As a barbarian, he starts with advanced Offense.

As a knight, he starts with basic Leadership and Artillery.

As a wizard, he starts with advanced Wisdom.

As a ranger, he starts with basic Leadership and Archery.

As a beastmaster, he starts with basic Armorer and Resistance.

As an overlord, he starts with basic Tactics and Estates.

Glory of Days Past[]

Tarnum appears in all Heroes Chronicles series and in Heroes of Might and Magic IV.

He is the only character in Heroes of Might and Magic series to have 6 different classes. 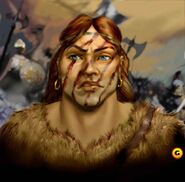 Tarnum's portrait as a Barbarian 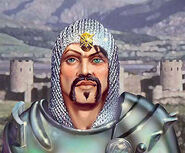 Tarnum's portrait as a Knight 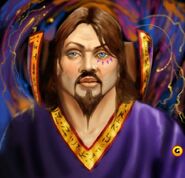 Tarnum's portrait as a Wizard 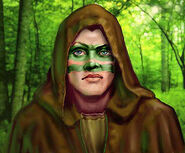 Tarnum's portrait as a Ranger 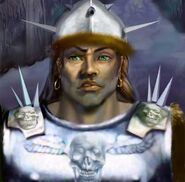 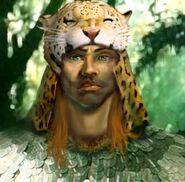