Alive (as of Heroes IV)
Tamika is a female Vampire Death Knight seen in Heroes III and IV.

Her specialty in Heroes III increases the Attack and Defense skills of black knights and dread knights in her army for each level after sixth level.

Tamika's superior combat skills have put her in a position of power within the military forces of Deyja. Besides merely leading troops, she is also responsible for training Black Knights and Dread Knights.OffBck

As a lesser vampire, Tamika didn't have enough influence to lead the other undead, so she fought her way to the top. But the Reckoning cheated her of everything she had gained over the years. For a brief time she had the sort of life she always wanted, and nothing will stop her from getting it back.OffBck

Tamika is a Death Knight, and starts with basic Necromancy and Offense.

Tamika is a death knight. 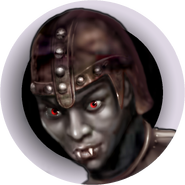