Dead (as of Trial by Fire)

Younger brother of Raelag and twin to Menan, Sylsai is the current leader of the Soulscar clan. He was always the most "hot-headed" of Tuidhana's sons. He respects his brothers but believes they are slow to act. He strongly dislikes Humans and Sylvan Elves, finding it impossible to forgive their behaviour during the War of the Bitter Ashes and the Day of the Tears of Fire, conflicts that led to the Dark Elves' exile. During the wars against the Dwarves, emissaries from Kha-Beleth approached him to form an alliance. He rejected him at the time. But the gruesome War Under the Mountain took its toll on both his body and sanity. He now thinks the Dark Elves should join the Demons and enjoy the tremendous chaotic powers offered by Urgash. He truly believes that he is destined to lead the Dark Elves.OffBck

After Raelag was not capable of leading the Soulscar clan, Sylsai accepted to rule the clan with an iron fist. He is not keen on taking any advice or ideas from others. If there is an opportunity to get more power, he will take it, even if it means dealing with the demons.

Lord Menan's twin brother, Sylsai couldn't have a more opposed personality. During the Dwarven wars, emissaries from Kha-Beleth approached him to form an alliance. He rejected them at the time, but the gruesome conflict against the Dwarves eventually convinced him that the tremendous chaotic powers offered by Urgash were the only way to ensure the Dark Elves' future. The years he spent in a damp cell following a failed coup have not changed his mind.OffBck

Sylsai is a Shadow Slayer.

Sylsai's icon in Shades of Darkness 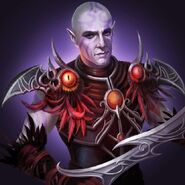 Sylsai's portrait in Shades of Darkness
Add a photo to this gallery
Retrieved from "https://mightandmagic.fandom.com/wiki/Sylsai?oldid=112061"
Community content is available under CC-BY-SA unless otherwise noted.