This article is about the creature from Heroes of Might and Magic III. For other uses, see sprite.

The sprite is the upgrade to the pixie, the first-level creature of the Conflux faction in Heroes of Might and Magic III: Armageddon's Blade. It can be recruited from the upgraded magic lantern.

Within the land of Antagrich, Pixies and Sprites have found a home within the walls of the Conflux. These flying creatures are usually found in large numbers and possess great quickness. Sprites strike so quickly, they prevent their enemies from counterstriking.OffBck

With a higher speed and maximum damage, and no retaliation, the sprite is even better at targetting weaker enemy creatures.

Their hit points are still incredibly low, so if they take any damage at all, they will die off quickly. 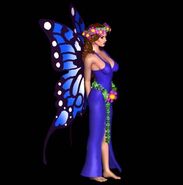