Sorshan is a tortured man with a tragic past. During the wars against the Dwarves, he and his family were captured. The Dwarf leader offered him a cruel choice: if Sorshan killed his father himself, he and his mother would be spared. Sorshan accepted the deal, but his decision continues to haunt him. His mother couldn't cope with what happened and committed suicide by dissolving into the wings of a Faceless. When he closes his eyes, he can still hear her voice, whispering in the dark... Having sought refuge in the vision-inducing consumption of ashes. He had hallucinations of the Invisible Library and has since been working on a plan to bring it back from Sheogh. He is sure the Library could be the key of his people's salvation. Saving the Dark Elves, for him, has become a very personal quest for his own redemption.OffBck

The leader of the Shadowbrand clan, Sorshan is disliked and feared by the other Elves. He is secretive and remains in the shadows, gathering information on everybody and making long-term strategies. Having survived traumatic events during the wars against the Dwarves, Sorshan might be slightly unbalanced - a fact that has become all too obvious since the disappearance of his protégé, prince Raelag, whom nobody but Sorshan seems to remember.OffBck

Sorshan is a Shadow Weaver.

Sorshan is a Shade Weaver. 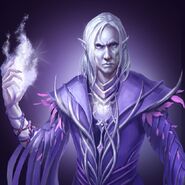 Sorshan's portrait in Shades of Darkness
Add a photo to this gallery
Retrieved from "https://mightandmagic.fandom.com/wiki/Sorshan?oldid=112335"
Community content is available under CC-BY-SA unless otherwise noted.