"We genies are compelled to keep our word. It is not only our sense of honor that binds us to our master, but also part of the magic that created us in the first place. Long ago before humans walked the land, we were the servants of the gods. We lived to serve. But we have always envied a human's freedom of will."
―Solmyr ibn Wali Barad —

Solmyr ibn Wali Barad (commonly shortened to Solmyr in Heroes of Might and Magic III and Solymr in Heroes IV), is a playable hero. A trapped Genie freed by Gavin Magnus and sworn into his service, he is among the most recognizable heroes in the franchise due to the use of his likeness in Heroes III backgrounds and his pivotal role in one of the Heroes IV campaigns.

While his early backstory remains unrevealed, Solmyr was trapped for a thousand years inside a lamp, until he was freed, at which point he swore an oath to serve his liberator for "as long as his feet walked this world." His saviour was in fact the Immortal King Gavin Magnus, Grand Vizier of Bracada, and as such Solmyr seemed to have sworn an oath he would be forced to carry out for all eternity.

Solmyr appeared to take his oath very seriously, becoming legendary among his fellow genies for his dedication and loyalty. Solmyr served as one of Bracada's leading generals, going so far as to undertake many of the military duties of Gavin Magnus. He participated as a commander in the Restoration War, assisting Queen Catherine Ironfist in her liberation of Erathia.

During the Reckoning, Solmyr survived by momentarily fleeing to the Elemental Plane of Air, only to return in search of his Immortal master. As he found the unconscious yet undying body of King Gavin in the ruins of Celeste, he carried his master through one of the many magic portals into the new world of Axeoth. Here, he assisted Magnus in recreating the nation of Bracada.

A while after its creation, Gavin Magnus became aware of the founding of another, similar nation called Great Arcan. Gavin Magnus intended to unite the two nations, offering his hand in marriage to the nation's Queen, Emilia Nighthaven. His offer, however, was rejected, and he ordered Solmyr to invade Great Arcan in order to put it under his dominance. Solmyr found the task hard to accept, going to extraordinary lengths of courtesy with his enemy, Queen Emilia, even luring himself into her royal gardens in the form of a blue parrot in order to talk with her.

In the end, the young queen and her even younger nation not only successfully resisted the invasion, but defeated Solmyr's force. For his gallantry, however, he was allowed to leave peacefully.

As Solmyr returned to his master, he was surprised not to see his failure being taken gravely. King Gavin was hosting a group of Axeoth's native Red Dwarves, formulating secret battle plans. In order to redeem himself in his liege's eyes, Solmyr was sento on a quest to locate the burial grounds of the black dragons, and retrieve their skeletal corpses. Before he left, however, Solmyr employed a halfling contact - Eddwil - to spy on Gavin's new allies.

Solmyr's quest took him to the snowy wastes of northern Iranese, populated by Necromancers and Sorcerers, one of the latter - Lord Bloth - being directly allied to the black dragons and being sworn to protect their burial grounds. Solmyr even recieved an offer of bribery to leave the region in peace, but pressed on regardless, believing this to be his only chance to regain his master's confidence.

After a while, Solmyr was informed by his contact that the Red Dwarves were working on plans for a dragon golem warmachine. Solmyr thought this impractical, seeing as the amount of metal used to create one such giantic golem would suffice to create a much more effective force of normal Golems. It turned out, however, that his quest for the dragons' bones was to counter this, the bones were meant to imbue the golem's structure with greater power.

The Search for the Rainbow Crystal[]

After returning to Bracada's capital, the construction of the new superweapons commenced. However, the Red Dwarves proved unreliable as they took control of their own machines in order to solve a drunken quarrel, wrecking the capital and killing their own leader, Koelox, in the process. Furiously, Gavin Magnus locked himself into his study to find a solution.

Once he returned, he ordered Solmyr to go on a quest for an artifact known as the Rainbow Crystal. Magnus had already made the arrangements, and Solmyr had little choice but to travel to his guide, Holman, and proceed with the quest.

The quest led him underground, into the lands of an undead lord named Old King Dreggar, who had used the Crystal to reduce his enemies into mindless puppets. Solmyr however, having done sufficient research, was able to prevent this from happening, defeating the old king and returning triumphantly home with the crystal.

Upon his return, Solmyr believed that the Crystal would be used to control the unruly Red Dwarves. Gavin Magnus, however, had plans of a far greater scope. He intended to enslave the entire world, and unify them under his will. The Immortal King had grown tired of war and its consequences, and viewed this as the only way to create everlasting peace.

Their first targets were the citizens of Great Arcan, and several of Queen Emilia's vassals, including Lord Landrew, fell to the powers of the Pendulum. The Queen was not able to maintain control of her kingdom, and fled. Victoriously, Gavin and Solmyr entered and conquered the capital city of Arcania.

The genie's only hope was to seek out the exiled queen and gain her trust. During this search, he corresponded with his master with pleas of stopping, but to no avail.

In order to defeat the Immortal King, the rebels laid a plan. They would split into two parties, one lead by Emilia and General Tharj would seek the Sword of the Gods to slay King Gavin if need be, while Somyr would once again descend into the realm of the deceased Dreggar to find a way of negating the Pendulum's powers. With the aid of a ghost named Daeraphena, Solmyr learned that only an artifact called the Mind Shield could do so.

As the parties returned, Emilia lost most of her companions to the powers of the Pendulum. Only she, Tharj, the hunter Kodge and Solmyr remained free. General Tharj decided that he would go to Arkania in a suicide maneuver to buy the Queen and Solmyr time to locate the Mind Shield. He later returned, mindless, with orders to assassinate Emilia. Before he could so however, he was killed by an archer, and Emilia grieved bitterly for his death.

Emilia and Solmyr discovered the Shield, toasting the courage of Tharj before attacking Gavin Magnus with their sentient forces. The battle turned in their favour, with Magnus eventually succumbing to his wounds. Unfortunately, the Sword of the Gods was not enough to destroy the Immortal King, who rose and attacked Solmyr. His attack was blocked by Emilia, taking Magnus' sword in the stomach. Acting fast, Solmyr struck the vulnerable Pendulum with a lightning bolt spell, shattering the Rainbow Crystal and Magnus' mind along with it.

With Magnus' mind linked to the Pendulum, he had now been reduced to a lethargic, mindless man who would eat and sleep, but otherwise seemed empty. Solmyr had him guarded, believing that he would live out the rest of eternity in this mindless - but peaceful at last - way.

Queen Emilia, who had survived, but was now paralyzed from the waist down, was celebrated by her people and would continue her reign. She took Solmyr as her advisor and close confidante.

Solmyr was trapped in a genie bottle for over a millennium, and was so grateful to the human who finally released him that he accidentaly swore to serve the man for eternity. As fate would have it, that man is Gavin Magnus, the immortal ruler of the Bracada Highlands.OffBck

Solmyr ibn Wali Barad is legendary among the genies for his strong sense of honor and duty. He believes so strongly in keeping his word that for centuries he served the Immortal King, Gavin Magnus, after a hasty promise. Solmyr has seen the distant past and the destruction of an entire world, and he hopes to live long enough to witness the end of time as well.OffBck

As stated by his in-game biography, Solmyr is an extremely loyal person, having served his master, Gavin Magnus diligently to such a degree that the Immortal King began trusting him entirely on matters martial.

He is also in possession of a strong conscience, as shown in the story arc of the Order campaign in Heroes IV, which forces Solmyr to betray his long-time master in order to stop him from enslaving the world. This is not an easy act, and is only done after a deep inner struggle and self-justification on the grounds that his oath, de jure, had been fulfilled.

He considers himself to be "a student of human history", as spoken in the mission briefing for the first Order mission in Heroes IV. Although what this exactly entails is not entirely certain.

Solmyr is a Wizard. He starts with basic Wisdom and Sorcery.

Solmyr is a mage. 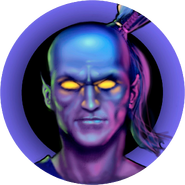 Artwork of Solmyr, made by Ubisoft