Duke of the Griffin Duchy

"It all went wrong the day our father, the Duke of Griffin, died."
—Anton, Heroes VI trailer

Duke Slava Griffin is a hero in Might & Magic: Heroes VI.

Raised by his Aunt, the Necromancer Sveltana, after the death of his father when he was a boy, Slava nonetheless managed to grow up a rash but good-natured young man.OffBck

He is the Duke of the Griffin Duchy after his father, Pavel, died while fighting against a demon incursion. Slava formally inherited the throne by the age of 5, but Sveltana in reality took the matters of the Duchy into her own hands. Hence young Slava was considerably aided and supported in growing by his aunt until she believed he was mature enough to become the Duke.

Taking up the title of Duke of Griffin when he came of age, Slava was a true example of the Griffin’s dual nature. Making peace with the Orcs of the Whitespear tribe, which its chief Kraal became his Master-of-arms, and inviting them to settle in his Duchy, he nonetheless took part to the War of the Bitter Ashes against the Elven queen Tuidhana of Tarlad. Emperor Liam, seeking to strengthen his hold on the Stag and Griffin families, arranged his bethrothing to Cate, one of the daughters of Connell of Stag. Slava and Cate immediately liked each other, and looked forward to their wedding.

As the war against the Elves dragged on, a party of assassins managed to sneak inside Connell’s castle, and assassinated Deridre, Cate’s twin sister. Cate’s personality changed drastically after this tragedy. Once lively and feisty, Cate became guarded and distant. Slava was drawn back to his former flame, Elisabeth, a barroness of the Greyhound Duchy. He intended to make Elisabeth his wife, but Emperor Liam forbid their union, insisting that Slava kept his vow to marry Cate instead, for reasons of state. However, Elisabeth was already pregnant with Slava’s first son, Sandor, which the Emperor never accepted as a legitimate heir to the Griffin Duchy. Slava, however, always recognized Sandor as his son.

Despite this rocky beginning, Slava and Cate, now husband and wife, eventually grew to love each other, and managed to build a strong house together, giving birth to four legitimate children: Anton, Irina, Anastasya and Kiril.

Slava’s life was plagued by repeated conflicts with his neighbour and rival, Gerhart of Wolf. In an effort to force them to make peace, Emperor Liam, following the advice of Archangel Uriel, forced Slava to offer the hand of his daughter Irina to Gerhart in marriage. Slava’s children, especially Irina as one can expect, never quite forgave their father for not standing up to Liam that day.

However, before Slava could even have a chance to protest or even explain the situation to his children, he was eventually murdered in 564 YSD by his other daughter, Anastasya, under the magical influence of a then-unknown party. While the Angels were quick to blame the Faceless for this heinous act, the true culprit was eventually revealed to be Uriel himself, who feared Slava would eventually rebel against the Angels’ authority, and wanted to put Anton, more “malleable”, in charge of the Griffin Duchy.

In the end, his children would avenge his death by revealing that Uriel was the one who controlled Anastasya into murdering her father and having him killed by the Demons. His son Anton was then celebrated a war hero within the empire and became Empress Gwendolyn's consort while Irina defeated Gerhart and took control of the Wolf Duchy before handing over control to her son, then returning to the Lotus Empire. Slava's remaining children would fulfill their destinies outside of the empire, Sandor became a Barbarian leader, Anastasya joined the Necromancer's alongside Sveltana and finally Kiril remained in Sheogh as the infernal overseer of the Faceless' Invisible Library.

Slava is the first campaign (and tutorial) hero. Starts as a Knight.

Slava appears as a hero card. He is the leader of the Haven faction. 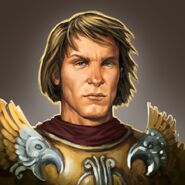 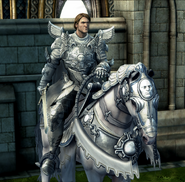 Slava's artwork in Duel of Champions
Add a photo to this gallery
Retrieved from "https://mightandmagic.fandom.com/wiki/Slava?oldid=148733"
Community content is available under CC-BY-SA unless otherwise noted.