"Dealing with Sylvan bugs and treacherous humans - Sinitar, your lusts and hates have brought ruin and death to your clan. You disgust me."
—Eruina [src]

Sinitar is a hero of the Dungeon faction in Heroes of Might and Magic V and in Might & Magic: Heroes VII. As well as being available for recruitment in taverns he plays a role as one of the antagonists in the scenario Defiance.

The warlocks of Ygg-Chall are dark and shadowy wizards, and Sinitar is special even among this strange group. Not only can he empower spells, but his skill is such that he can do it while using less of his own mana. No one is sure how he came to have this ability, but the scars on his face tell of bargains with the dragons of shadow -- bargains that can take a heavy toll on both body and mind.OffBck

Sinitar was a dark elf Warlock known to be active shortly after the Day of the Tears of Fire and the subsequent loss of the Dark Elf homeland and their leader Tuidhana, its aftermath. He had made a deal with Shadow Dragons, allowing him to empower spells at a lower cost, which was quite a feat for a Warlock. However, the outcome of the bargain left him scars on his face and his sanity questionable.

He settled in the caverns beneath the largely Holy Falcon Empire controlled Farwind Island, next to another dark elf seeking refuge here named Eruina. However, he grew jealous of his neighbour and sought to take control of her lands. This opportunity would soon present itself when Rutger, leader of the Falcon Empire town on this island, sold out the location of Eruina to the Elves of Irollan, who sent forth the Ranger, Talanar to deal with her. Seizing this opportunity, and driven by hate and lust, he offered to ally himself with Human or the Elf as long as Eruina was taken down. It is unknown if his offers were accepted, but regardless he declared war to Eruina.

Sinitar's boundless ambition and utter lack of scruples make him a deadly adversary. But what makes him truly special among the sorcerers of Ygg-Chall is his ability to regenerate his spiritual energy, allowing him to keep on casting spells when his enemies have long become exhausted. Sinitar fears no one... except maybe his hated rival, Eruina. Last time they crossed paths, Sinitar only survived by making terrible bargains with the Black Dragons -- bargains than took a heavy toll on both his body and mind.OffBck

In the Defiance scenario, the sound of a horse dying is heard as he is killed, despite the fact he is riding a lizard. 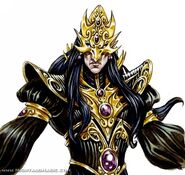 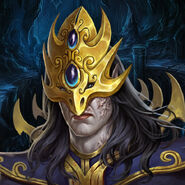 Sinitar, prerelease portrait in Heroes VII
Add a photo to this gallery
Retrieved from "https://mightandmagic.fandom.com/wiki/Sinitar?oldid=124698"
Community content is available under CC-BY-SA unless otherwise noted.