For the character in Might & Magic: Heroes VI, see Shiva (Ashan).

Alive (as of Heroes IV)
Shiva is a female Barbarian that appears in Heroes III and Heroes IV.

Shiva is the youngest of six daughters in a family of circus animal trainers. Unhappy with the prospect of spending her entire life in the family business, she left the circus to join the Krewlod military as a mercenary, a business that she has excelled at.OffBck

Beautiful Shiva should have been her clan's religious leader, but her family was killed during the Reckoning while attempting to save some sacred animals. Despairing over the futility of all her ceremonies and sacrifices, Shiva abandoned the gods and took up a sword instead.OffBck

Shiva is a Barbarian. She starts with basic Offense and Scouting.

Shiva is a Barbarian.

Gold Rush: Shiva appears as a starting hero, along with Zubin. 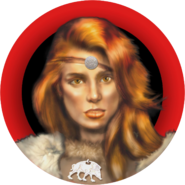