Destroyed (as of the Unification Ceremony)

"I am Sheltem, Guardian of Terra. Twice now you have defeated my tests, thinking yourself worthy of invading my world. Walk carefully then through this third challenge, and take heed your final decision is truly what you desire - for the course of destiny cannot be turned once set in motion..."
—Sheltem [src]

Sheltem the Dark (legacy official bio) is an android who acted as the main antagonist throughout the series from Might and Magic Book One: The Secret of the Inner Sanctum up until Might and Magic V: Darkside of Xeen. He was a S.H.E.L.T.E.M. unit Guardian who was designed by the Ancients to act as the overseer and "Supreme Law" of the seeded world of Terra, but poorly-implemented directives and logical faculties caused him to turn renegade: resolutely convinced that the Ancients were working against his goal to protect Terra, he launched an interplanetary campaign against his creators, driving worlds into their suns and disrupting the destinies of numerous projects.

Sheltem's corruption became a force to be reckoned with when his counterpart, Corak, was dispatched to deactivate and retrieve him once the Ancients learned Sheltem had been engaging in "experiments in self-sufficiency". He outmaneuvered the Ancients' agents, escaped to VARN-4 and, armed with newfound heurism and emotion, masqueraded at the formerly-benevolent King Alamar for several years. Upon being unmasked, Sheltem fled VARN 4, and battled Corak on three successive worlds. His zealous plots in the name of Terra's defence would set the stage for the quandaries depicted in all of the series' early installments.

The malfunctioning Guardian's rebellion came to a head on the world of Xeen, when Corak, assisted by the dragon pharaoh and a band of native adventurers, successfully apprehended and cornered Sheltem in Castle Alamar. Their duel ended in a stalemate, and Corak was required to sacrifice himself to destroy his nemesis, thereby bringing the interstellar crisis to a bittersweet close. In spite of his destruction, Sheltem's actions had left a profound impact on the Ancients' colonies, and his name continued to be invoked long after his downfall.

Sheltem is a Guardian, an android created by the mysterious Ancients to rule over the world of Terra. However Sheltem started to resent the Ancients’ interference with his mission. Because of Sheltem’s erratic behaviour, he was taken into custody by another Guardian, Corak. Sheltem escaped and left a trail of deceit and destruction over several different worlds on his way back to Terra. Sheltem is ruthless and tyrannical, and will stop at nothing to achieve his goals, even if it means destroying whole planets.OffBck

Sheltem first makes his appearance on VARN as the escaped prisoner of 'aliens,' when he escapes the capture of Corak. When he is caught by the heroes to be impersonating the King and is pursued by Corak, he makes his escape through 'gates to another world' to CRON.

Sheltem escaped by a magic portal and has landed on CRON (Central Research Observational Nacelle). Sheltem has driven it off of its course and hurls it toward the sun. While the heroes are trying to stop CRON from being destroyed, Sheltem escapes again.

Sheltem has escaped to the planet Terra, where he landed with six biospheres from the space station. Parts of those biosphere become to be known as the Isles of Terra.[1] But the heroes find out what he's doing behind the scenes and they drive him off course. Sheltem escapes (again) in a space shuttle and Corak goes after Sheltem in another shuttle. Our eight adventurers take a third shuttle and follow Corak and Sheltem. Sheltem safely landed on Xeen (Xylonite Experimental Environment Nacelle), but Corak does not appear to land as safely. The heroes never land, and are 'never seen again,' reappearing in Might and Magic VII.

Log Entry XLDBA: The X.E.E.N. project looms ahead. All three ships will crash into it tomorrow. My stasis generator will protect me and my ship from the impact. Mostly. May the Gods smile upon me.

Log Entry XLDBB: Impact complete. Stasis passed in the blink of an eye. My sensors indicate that the main ship passed through the atmosphere of the other side of the world and burned up, but not before safely beaming the Terran natives to the surface. Corak's escape pod landed in lava and is stuck there. How sad.

A new party of adventurers is formed with a vision of peace to defeat a new undead calling himself Lord Xeen, dwelling in the Clouds of Xeen, a world in Xeen's sky. When the heroes defeat him, we see a vision from Sheltem saying "You may have defeated my lieutenant, but the Darkside of XEEN will always be mine. BWAHAHAHAHAHAHA!!!!!!"

Sheltem is again masquerading as Alamar and is still driving biospheres into their suns. The Dragon Pharaoh summons the heroes, and they have to perform many tasks to set things with the planets right again. The adventurers find Corak's shuttle, in which they find a Soul Box. With this device, they can smuggle Corak's essence into Sheltem's castle without Sheltem knowing. When the heroes get there, they release Corak, and the two confront each other. Sheltem has grown much bigger and stronger over time, and it seems that Sheltem will win. But Corak grabs Sheltem and activates his self-destruct mechanism, destroying them both. This ends the original Might and Magic storyline. 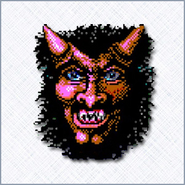 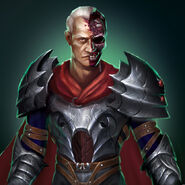 Sheltem's icon in Heroes VI
Add a photo to this gallery

Retrieved from "https://mightandmagic.fandom.com/wiki/Sheltem?oldid=141346"
Community content is available under CC-BY-SA unless otherwise noted.