Sharka is a character featured in Might & Magic: Heroes VI.

Sharka, a powerful Orc warlord who rules several tribes in the Pao Islands of the Jade Ocean, gives those who cross his path two choices: swear loyalty or die.
Sharka's cut-and-dry philosophy stemmed from a severe upbringing, where his tribal elders instilled a powerful desire for survival in their offspring through a coming-of-age ritual that pitted Orc against Nature, Orc against Orc, and Orc against All.
Abandoned on a small, hostile island, twenty Orc youths would fight for as long as it took to establish one true leader among their number. For every oath of allegiance, an Orc would be marked. At the end of the trial, the Orc marked most -who'd switched loyalties most often- would be banished.
Sharka won his year without a single mark on his skin.OffBck

Sharka is the tyrranical leader of Pao Islands Orcs. His perspective is simple - either people are loyal to him or are dead to him.

Sharka is a Warmonger.

Sharka's name is a pun on the word "shark". 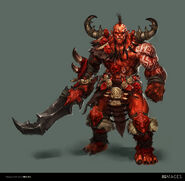 Add a photo to this gallery
Retrieved from "https://mightandmagic.fandom.com/wiki/Sharka?oldid=124695"
Community content is available under CC-BY-SA unless otherwise noted.