This article is about the creature from Heroes VI. For other uses, see shadow watcher.

The shadow watcher is a creature in the Shades of Darkness expansion to Might & Magic: Heroes VI. A Core creature of the Dungeon faction, it is the upgraded version of the shadow lurker.

The Watchers are evolved aspects of the Lurkers. Like Malassa herself, they can see through the shadows, the secrets and the lies. The Dark Elves use them to uncover hidden truths.OffBck

The shadow watcher's attack may be relatively weak for a core creature, but its Harrowing Vision effect makes up for the immediate damage by adding a damage over time effect to the attack. The damage of both their normal attack and the damage over time effect from Harrowing Vision may be increased further by making use of the shadow watcher's Mind Probe ability. Mind Probe's effect increases the damage taken from all sources, not just Darkness damage, and the cooldown for the ability is fairly short, so don't hesitate to make use of it on the enemy that is the highest priority to defeat, even if the shadow watcher is to be attacking a different foe. Unless there is a pressing need to attack earlier, allies that will be targeting the enemy the shadow watcher will Mind Probe may wait until after the shadow watcher has used its ability to strike, increasing their damage significantly. One must keep in mind that the shadow watcher's attacks are of the Darkness element, markedly decreasing their damage against other units of the Dungeon faction or darkness elementals.

Dungeon Might or Magic heroes that have gone down the path of Blood may use the shadow watcher's ability to great effect; Dark Prophets by exploiting an enemy with both Mind Probe and Harrowing vision by using the Shadow Implosion ability, causing the target to take four times the damage over time it is currently taking all at once. Increased by Mind Probe, the damage dealt will be rather high, and it will increase exponentially by adding the damage over time of the shade's attack, the shadow/black dragon's Withering Breath, or the hero's own Offering to Malassa ability. Shadow Slayers may make use of their Soul Mark to mark a creature to take extra darkness damage. If the Black Dragon and the Faceless puppeteer both wait until after the shadow watcher Mind Probes and attacks the enemy, and then follow up with their own Withering Breath ability and attack, respectively, the enemy's damage taken will be amplified many times over.

When fighting shadow watchers, speed is key, as the initiative of the shadow watcher is low. If an ally cannot reach it in the initial turn to stop it from using its ranged attack, stunning or turn-skipping effects may be used to prevent it from attacking in time for allies to reach it. Most, if not all allied ranged units should be able to fire before the shadow watcher, reducing its number and weakening it offensively. Should a shadow watcher fire an attack on an ally, healing or regeneration effects may be used to offset the damage taken by Harrowing Vision. AI-controlled shadow watchers often use Mind Probe on a creature, and will continually attack the Mind Probed creature, meaning that only that creature will need protection from their ranged attacks. When fighting them in an army, potential allied chakram dancers are often the more dangerous ranged foe, so a stun or turn-skipping effect should be saved for them, and allied ranged units can be used to cripple the shadow watcher and keep their damage low, since Dungeon heroes often possess relatively few healing effects. Light magic is particularly effective against them, as with all Dungeon units, and even Healing spells of the Light magic School will damage them. 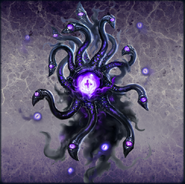 Artwork of the shadow watcher. 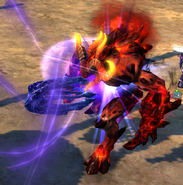 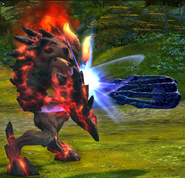 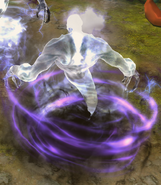 An air elemental taking damage from the Harrowing Vision effect. 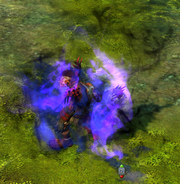