This article is about the creature from Heroes VI. For other uses, see shade.

Halls of the Black Heart

The shade is a creature in the Shades of Darkness expansion of Might & Magic: Heroes VI. A Core creature of the Dungeon faction, it is the upgraded version of the assassin.

The Shade is an elite assassin, empowered with various enchantments, all linked with the power of Darkness. His daggers are imbued with a mysterious kind of spiritual poison that slowly erodes his victim's life force.OffBck

The quintessential skirmisher, the shade thrives best in situations where it may strike, leave, and strike another target. They do not last long in protracted melee against foes, owing to their low might defense and hit points. Since their Shadow Cloak effect only lasts for two actions, they are not well suited to being held in reserve. Their positioning is key, as striking an enemy in response to an enemy's movement or attack opens themselves up to retaliation, whereas backstabbing does not. Unless they are the army's only melee creature, they should strike an enemy, become cloaked by the Shroud of Malassa effect, and then creep around to strike another foe. In this way, they may deal damage over time to many foes, and avoid being struck themselves.

Shades are the least useful Dungeon creature when besieging a town, as attacking a section of wall requires them to reveal themselves, entering a moat will usually halt their movement or end their action, and the protracted combat usually forces them to reveal themselves before they have an opportunity to reach the enemy. If they cannot be brought over the wall via teleportation or other support abilities, they are best used hassling enemy creatures that do come over the walls. When they are the target of a siege, shades may use their invisibility to their advantage by leaving the walls and striking enemies, only to be made invisible and impervious to attack once more by the Hero. This strategy can be dangerous in the long term, however, and faceless and ranged units should help support the shade to help prevent enemy forces from converging on him.

When fighting shades, the key is to begin by revealing them, which is a simple, but not necessarily easy, task. The easiest way to reveal a shade is by using an area of effect damage spell in an area where a shade is believed to be, as this will instantly reveal their location. Should this solution be unavailable, bolstering a stack with defensive enchantments or Reinforcements and sending them forwards to a location where a shade is believed to be will reveal them, or they could travel forwards should no allies be nearby, making them the target of an attack by the shade and thereby revealing them. Once a shade is revealed, its defensive benefits are lost and it may be defeated with little hassle, unless it is part of an army, in which case the reapplication of invisibility is always a concern. A shade should be defeated as soon as it is found, should it be part of a Dungeon army. 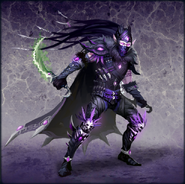 Artwork of the shade. 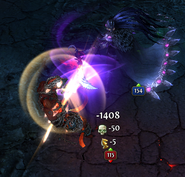 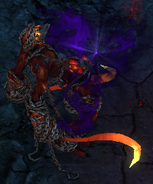 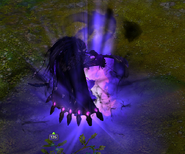