Duke of the Stag Duchy

Alive (As of Heroes: VII)

Seamus na Feidh is a character in Might & Magic: Heroes VII.

Seamus na Feidh is the Duke of Stag, but not a direct descendant of the legendary founder of the Duchy, Ronan the Great's own brother, Oisin. The original Stag line disappeared around the Second Eclipse, with the death of Duke Connell. Seamus actually descends from one of Connell's cousins-by-marriage, who inherited the Duchy after Connell's death. Seamus played no part in Empress Maeve's death, but he quickly saw it as a one-in-a-lifetime opportunity to rise higher than his birth would have normally allowed.
It is now clear that he is the one who has, through a network of middle-men, hired the services of the Dark Elf assassin clan called the Blades of Erebos. Seamus tried to have the Blades fake the murder of his own daughter Nolwenn, framing Ivan for the foul deed. The plan has failed, but there's no turning back now. Seamus knows he can win the war. He's patient, and cunning. He will be Emperor, whatever the cost.OffBck

Seamus was the Duke of the Stag who was once good friends with Vassily, Duke of the Griffin becoming something of an uncle figure to Vassily's youngest son, Ivan.

After Maeve died during the Fourth Eclipse, Seamus was believed to be the next ruler of the empire, but scholars had a different emperor in mind: Ivan of the Griffin Duchy.[1] Seamus was not pleased and while other duchies were at war, he secretly gathered supplies and raised an army.[2] After some time, as Ivan and his allies took a lot of neighboring lands, Seamus started his invasion on the Unicorn Duchy.[3] In due time, Archbishop Wilhelm and his council decided Seamus to be the next Emperor, in an effort to prevent the empire from ripping itself apart any further.

While many of the Dukes agreed to name Seamus emperor, both Ivan and Stefan refused to acknowledge Seamus as emperor. Seamus, in his first decree as the Stag Emperor, decided to give supplies to the people of the most devastated regions of the empire, giving himself an image of a just ruler. Though unknown to most, his Crusader army attacked anyone that was Ivan's ally, even burning villages that sympathized with either Ivan or Stefan.[4] When Ivan decided to attack Seamus and end his regime, Seamus sent Enguerrand, his ally from the Greyhound Duchy, who defeated Ivan at Meadowfair, shattering his Iron Feather sword.[5] Despite this victory, Ivan survived and escaped thanks to the actions of the Wizards of the Silver Cities, led by Lady Tanis, who, along with her colleagues, decided to turn against him.

Though the battle at Meadowfair ended in his favor, Seamus not only had to still deal with Ivan but also his newly formed Shadow Council, made up of various yet famous and powerful individuals of Ashan. In an effort to end the war and defeat his rival once and for all, he called upon his old allies in the Blades of Erebos. In truth, Seamus was the one who hired the blades to assassinate Brendan Falcon to ensure he would become emperor of the Holy Empire.

In the guise of a parlay of offering the position of Archduke and his daughter's hand in marriage, Seamus met with Ivan near the ruins of Falcon's Reach. Once they met, Seamus sprung his trap by summoning the Blades of Erebos in assassinating his own daughter, framing Ivan for the deed. This would allow Seamus to turn the empire against Ivan. In truth, Seamus didn't really have his daughter killed but her soul separated giving the appearance of death. Despite his and the blades efforts, Ivan succeeded in rescuing Nolween's soul and reunited it with her body. This in turn caused Nolwenn to completely turn against him, as well as revealing his treachery to the empire. Every Duchy in the empire soon sided against him, leaving only his own duchy in the empire he controlled. Seamus couldn't even call upon his angel allies as Murazel convinced them and the priests of the Church to remain neutral. Only Wilhelm remained his ally but not out of loyalty but of a vow of honor.

Refusing to accept Ivan as the new emperor of the empire let alone surrender, Seamus defended himself in his duchy but even then, his madness became clear. The Duke was willing to kill his own subjects when they began to turn against him as well. Unable to handle his madness any longer, Ivan laid siege to Horncrest and defeated him after a lengthy battle. In the aftermath, Seamus was arrested and sent to prison for the rest of days as one of his daughters assumed control of the Duchy. With the Ten Years War finally over, Ivan was named Emperor of the newly rechristened Holy Griffin Empire.

Seamus was remembered as a power-mad betrayer but Ivan grimly remembered the times when Ivan looked up to him as a brother to his father and an uncle to him.

Seamus is a Vindicator. 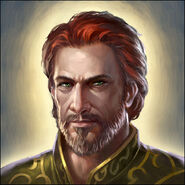 Seamus's prerelease portrait
Add a photo to this gallery
Retrieved from "https://mightandmagic.fandom.com/wiki/Seamus?oldid=112030"
Community content is available under CC-BY-SA unless otherwise noted.