Alive (as of Dark Messiah)

Sareth is the Demon Messiah of Ashan's ancient lore, and the protagonist of Dark Messiah of Might and Magic. The son of Kha-Beleth and Isabel Greyhound, he was born at the conclusion of the first act of Queen Isabel's War, and was raised in Sheogh until an indeterminate point at which he was handed over to demonic cultists. Later, he trained under the sorcerer Phenrig, and went on to become the chief adversary of the Necrolord Arantir. He had two lovers, Xana and Leanna. He is voiced by Tercelin Kirtley.

A dedicated student raised by Phenrig, a stern mentor, Sareth knows little of his past. He has nevertheless absorbed his lessons in the mastery of the arts of warfare, becoming proficient with both weapons and spells. Sareth has now been sent on a mission by Phenrig, whose uninformative hints and curt explanations tell Sareth only one thing - that there is much more to this task than he has been told.OffBck

The Prophecy of the Demon MessiahEdit

Sar-Shazzar gives the Prophecy of the Demon Messiah, which predicts, among other things, that a half-demon hero will someday shatter the Demon Prison and unleash bloody chaos on the world.

Sareth appears in Dark Messiah of Might and Magic. Also, Sareth is mentioned by Tieru as a part of a prophecy in Heroes of Might and Magic V, by Isabel in Hammers of Fate, by Kujin (who talked about the prophecy to the Orcs) and by a mage Arantir encounters in Tribes of the East.

Sareth's portait as a Knight 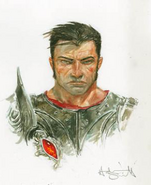 Sareth as he appears in promotional art for Dark Messiah: Elements

Sareth as he appears in promotional art for Dark Messiah: Elements

Sareth's portrait as a Demon Lord

Sareth as the Demon Messiah
Add a photo to this gallery
Retrieved from "https://mightandmagic.fandom.com/wiki/Sareth?oldid=157228"
Community content is available under CC-BY-SA unless otherwise noted.