Sarah is a hero in Might & Magic: Heroes VI.

One of the oldest Archangels, Sarah was born more than three millennia past when the Shantiri Empire was at the height of its glory.
While Ashan has experienced many upheavals over the centuries, the one constant for Sarah has been her unflinching dedication to Elrath, the Dragon of Light - the only true guard against the ever encroaching darkness.
Sensing a shift in the balances of power between the Dragons, the stirrings of the Faceless, and the discovery of the Mother Namtaru by the Necromancers of the Seven Cities, Sarah is once again doing everything in her power to serve Elrath.
Even if it means going against her own personal desires.OffBck

On Archangel Uriel's advice, she becomes Kiril's teacher. However, she was sent (along with Kiril) to Sheogh where she was to complete a ritual to find the Invisible Library. However, the ritual was not completed and she left Kiril in Sheogh.

Sarah becomes a Chaos Lord, despite her angel blood. 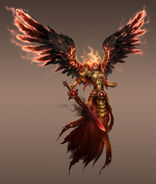 Add a photo to this gallery
Retrieved from "https://mightandmagic.fandom.com/wiki/Sarah?oldid=124686"
Community content is available under CC-BY-SA unless otherwise noted.