This article is about a Necromancer of Enroth. For his Ashan counterpart, see Sandro (Ashan). For other characters sharing his name, see Sandro.

Sandro the Great
Shadow of Death

Active (as of Heroes IV)

"When others like the powerful necromancer, Sandro, sought to control the world, the force of destruction supported them temporarily. Then, for lack of a better description, it changed its mind. Destruction and death turned upon itself. That's why no single man has ever ruled the world for long."
—Gauldoth Half-Dead

Megalomaniacal, sinister, strategically-minded and intelligent, Sandro is initially portrayed as an archetypal villainous conqueror, though adopts a more diplomatic (if no less superior) attitude to the world in later titles following his failure to seize Erathia. He is considered one of the most iconic characters in the Might and Magic series.

Sandro appears in a playable role in the first four Heroes games. Though a Necromancer hero in the latter three, he is a Warlock in the first game, one of nine such heroes. His unique ID in the map editor is No. 33. In Heroes II, he is moved to the Necromancer hero pool, with his empty slot taken by Alamar. His initial secondary skills are Basic Necromancy and Wisdom, though he plays no specific role in the campaigns.

One of the eight standard Necromancers, Sandro is a Sorcery specialist in Heroes III, receiving a 5% per level bonus to the skill; he also begins with Basic Necromancy. He is the protagonist of two Shadow of Death campaigns, playable throughout the entirety of Rise of the Necromancer (starting with the Cloak of the Undead King and Armor of the Damned) and Specter of Power. In both, he begins at level 1.

In Unholy Alliance, he is playable in Wrath of Sandro and Invasion, starting with the aforementioned combination artifacts at 25th level with 200933 experience. He is an enemy hero in Union and Fall of Sandro, at level 40 (3066455 points) and 43 (5555555 points) respectively. In Fall of Sandro he is armed with the Armor of the Damned; in Union his skills are specified, with each primary skill set to 20, and starting with Archery, Earth Magic, Fire Magic, Offense, Resistance, and Wisdom, in addition to his two initial secondary skills.

Sandro also appears in the March of the Undead scenario from the Playing with Fire campaign in Heroes of Might and Magic III: Armageddon's Blade, at level 14 with 28000 experience points. In Heroes IV, he is one of the fourteen standard recruitable Necromancers; though he has no campaign role, he is mentioned in Gauldoth Half-Dead's narrative.

Ajorn, one of Lord Haart's cultists, is based on his hero template.

Sandro is a questgiver and supporting NPC in Might and Magic VIII. He is the co-leader of the Twilight Necromancers' Guild alongside Thant. He gives the Recover the Nightshade Brazier quest - if it is completed, Sandro will join his fellow faction leaders in the Merchants' Guild at Ravenshore and provide advice to the player.

Sandro first studied Necromancy under the tutelage of the wizard, and later the lich, Ethric. Sandro has seen nearly all of Enroth and Erathia, and now serves Finneas Vilmar, leader of the Necromancers of Deyja.OffBck

Sandro's instinct to survive is almost as strong as his tireless ambition. His network of power in the old world was destroyed by the Reckoning, so now he has to start all over. Unfortunately, many of his old allies perished as well. But no one can say Sandro isn't up to the challenge.OffBck

An intensely power-driven, ambitious Lich, Sandro was inducted into the arts of magic in his youth as a Warlock by Ethric of Bracada and Jeddite, only to betray both by pursuing the path of Necromancy. Serving under Lord Alamar and Archibald Ironfist in Enroth, he later personally instigated a chain of events which led to the outbreak of the Restoration Wars in Antagarich. Some years later, he assumed control of the Necromantic Order; though the Order collapsed in the Reckoning, Sandro - characteristically - survived.

It is said that before Sandro ever studied Necromancy he was quite frail, with orange hair and a face filled with freckles, he saw it as weakness and dyed his hair black while with his knowledge of necromancy burned off his facial features.

Sandro was apparently born in the land of Enroth, and was apprenticed to the great Enrothian Warlock, Ethric of Bracada, alongside his friend, Jeddite, in his youth. Ethric, however, saw the impending darkness inside Sandro even before taking him on as a student. He knew that Sandro could never be trusted to handle the forces of magic honourably, and despite his initial intimations, he was truly shocked when he learned that Sandro had become a Lich and a Necromancer, soon before the First War of Enrothian Succession. It is implied that Sandro had travelled to Antagarich at least once in his youth as a Human, during which time he allegedly kidnapped and violated the (possibly adoptive) daughter of Jabarkas Boragus. After his transformation, Sandro fought in the Second War of Enrothian Succession on the side of Archibald Ironfist, and returned to Antagarich soon after the defeat of the usurper.

Wandering the continent for a time, he stole into the settlements of the living using a spell capable of covering his skeletal profile with illusionary flesh. Using this power, he made his way to AvLee, where he met an Enrothian Sorceress named Gem. Quickly becoming accquainted with her, Sandro posed as a Wizard's apprentice (using Ethric's name as said Wizard) seeking assistance in the destruction of evil artifacts. He implored Gem to garner the components of a dark relic, the Cloak of the Undead King, so that he might destroy it. However, when Gem handed over the components to Sandro, the Lich departed with it in tow and did not return.

At some point, Sandro also travelled to the wildlands of Avauntnell and, in the Wingtail Tavern, recruited a seemingly dimwitted Barbarian, Crag Hack, to gather the parts of the Armor of the Damned. Crag Hack, fighting seemingly innocuous Barbarians, Knights and Necromancers throughout Avauntnell to find the components, was enraged when Sandro disappeared without giving the maddened warrior his promised rewards upon the transaction.

With the Cloak and Armor in his possession, Sandro became unstoppable. He began his journey to Deyja from the Contested Lands west of Eeofol, unaware that Gem had already sent word to Ethric in Bracada about Sandro's betrayal. Ethric mustered his allies and began hindering Sandro's travel north. With the assistance of Jeddite, who had become a powerful Warlock himself, and others including the Ranger Ufretin and Jabarkas Boragus, he attempted to impede Sandro, who nonetheless easily overcame all of these opponents, journeying further northwest towards Ethric's Dungeon. Here, he encountered Vidomina, a Bracadan Alchemist aspiring to become a Necromancer. Sandro took her on as an apprentice, even betraying some form of affection towards her during their battle against Ethric. Together they defeated the old Warlock - Sandro seemingly raising him as a Lich afterward - and separated at the Deyja border.

In Deyja proper, Sandro met Finneas Vilmar, a young Lich lord who desired power. Noting Vilmar as a fine candidate for a "puppet-king", Sandro pitted his new ally against Duke Alarice, a nearby Vampire and Deyjan lord, in an attempt to contest his lands and put Finneas in a prime position to grab the throne from the current leader. The Necromancers successfully overthrew Alarice and the King of Deyja commended Vilmar, unaware that he was about to become their next victim. On Finneas' ascension, Sandro had Vayarad - a a Vampire secretly posing as a high-ranking AvLee Border Lord, Lord Falorel - assassinated for "becoming too powerful". Meanwhile, the AvLeean and Krewlish heroes he had tricked earlier - Gem and Crag Hack - mustered armies against him, with the backing of Erathian King Nicolas Gryphonheart. Defeating some of Sandro's border patrols, they met in a location named Bragden, near one of the Erathia-AvLee borders known as the "Wall of Destruction".

King Vilmar entrusted Sandro with the task of dealing with the four invaders. He soundly defeated Gem and Crag, along with their companions Gelu and Yog, who fled west to Antagarich's coastal regions. Subsequently, Finneas began to mistrust Sandro, goaded on by his other court-whispering advisors (notably Lord Smedth). Sandro returned to Deyja, triumphant, having reminded Finneas who was really in charge. As he amassed his legions, the four heroes who had escaped him began reassembling their own powerful artifact, the Angelic Alliance. The four heroes penetrated the Deyja border with the Angelic Alliance's power and marched toward Sandro's Necropolis. Sandro, unprepared for this offensive, was defeated in battle, though escaped destruction. However, Gem, Gelu, Crag Hack and Yog claimed the two artifacts he had assembled, and destroyed them, dispersing their components throughout the world.

With this massive failure, Finneas' trust in his chief advisor began to wear thin. Sandro, however, was busy formulating a new invasion into Erathia, arranging for Vilmar's loyalist, the double-agent Lord Haart, to secretly poison King Gryphonheart. He then allied with the Dungeon Overlord of Nighon, who constructed a tunnel from the Nighon Straits through Stone City and into Battlestead. Additionally, he gained the support of King Xenofex of the Kreegans, retrieving their lost Eversmoking Ring of Sulfur. Sandro's final goal before the invasion was to eliminate the court-whisperers who were influencing Vilmar. Finneas apparently agreed to Sandro's plan for killing off Lord Smedth. Sandro defeated Smedth, but Finneas cunningly had Sandro arrested and imprisoned for attacking an innocent Deyjan lord, claiming all credit for the impending war which Sandro had single-handedly instigated.

The enraged Necromancer remained imprisoned until midway through that very war. Some time after Vilmar's death and succession at the hands of the reanimated Lich King Gryphonheart, Vidomina and the Vampire Lord Vokial were dispatched to the Emerald Hills to raise a legion of Skeletons. During their conquest of the region, they released Sandro from prison to aid in the war effort. However, his release nonetheless did little to prevent the Lich King's power from rising beyond control; to ensure their survival, the Necromancers were eventually forced to ally with Queen Catherine Ironfist to unite in Nicolas' destruction. After Deyja's failure in the Restoration Wars, Sandro journied to the last of the Necromantic Order's major outposts, the realm of Shadowspire on the continent of Jadame. Here, he soon assumed the role of the Order's guildmaster, sharing the position with Thant.

Opposed by the northwestern Temple of the Sun, the Guild remained a dominant power on the continent. Under Sandro's leadership, the Necromancers either joined the Alliance of Jadame and triumphed over the Temple or were defeated (depending on the actions of the Hero of Jadame). Sandro survived the Reckoning and the destruction of Enroth, crossing over into Axeoth where he currently attempts to rebuild or recreate his network of power. His near-conquest of Antagarich was reflected on by Gauldoth Half-Dead during the foundation of Nekross, who regarded the Lich's early success and crushing defeat in the events before the Restoration Wars as an imbalance between creation and destruction.

Sandro appears in Heroes I, II, III, Shadow of Death add-on, Armageddon's Blade add-on, Heroes Chronicles: Conquest of the Underworld and Heroes of Might and Magic IV.

Sandro in Heroes I

Sandro, disguised as a living human 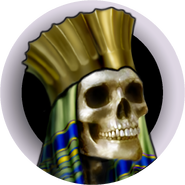 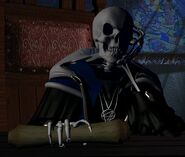 Sandro wondering how to persuade the Kreegans to join his invasion and war against Erathia.

Sandro's appearance in "Might and Magic 8" as the Guildmaster of Shadowspire.

Sandro, in Heroes of Might and Magic for Game Boy Color
Polski Русский
Community content is available under CC-BY-SA unless otherwise noted.
Advertisement