Alive (as of Hammers of Fate)

Raelag is a character that appears in Heroes of Might and Magic V and Might & Magic: Heroes VI. During his years of service to Demonkind he was known by the pseudonym Agrael.

Raelag is one of Tuidhana's three sons and heir of her throne. He was one of the first Elves to accept to worship Malassa, dealing with the Faceless to abandon Sylanna. He soon became the leader of the Soulscar clan.

Agrael rose rapidly through the ranks of Demon cultists to become a trusted right hand of the Demon Sovereign. His detractors call him reckless and over-ambitious, but Agrael's measured aggressiveness has made him a feared and respected leader in battle. He will attack when a good opportunity presents itself, and does not hesitate to take risks when the rewards are commensurate.OffBck

Then, he was approached by Kha-Beleth, the Demon sovereign. Despite all his efforts to escape his dark destiny, Raelag would eventually became Kha-Beleth's servant. He managed to defeat four powerful Demon Lords, including Veyer. Kha-Beleth was impressed and sent him to the Holy Griffin Empire to watch over Isabel. His last task was to watch Queen Isabel and take her away to Sheogh. However, he fell in love with her and this made him a traitor. He had no choice but to foil Kha-Beleth's plans by stealing the Heart of the Griffin (which he used against Veyer). He would've been forgotten, but the Shadowbrand clan leader, Sorshan, rescued him and brought him to power. Afterwards, he needed to go to Tieru to purify him of Demon Magics using the Rite of True Nature.

Nothing is known of Raelag's past, and though he is direct and ruthless in battle his plans and tactics are kept as secret as his personal history. Because he often out-thinks, outflanks, and outmaneuvers his opponents, they move with a great deal of hesitation when facing him in battle. When up against this wily and intimidating warrior, his enemies often find themselves second-guessing their own plans.OffBck

After the ritual, he went to Ygg-Chall, where the Shadowbrand clan lost its leader. Raelag entered the contest and he succeeded, becoming the new clanlord. He needed to get the other clans together — Malsara told him that he needs to get a Tear of Asha. Along with Shadya, Raelag defeated Nightshard clan and got the Tear of Asha. Next, he got the most powerful clan, the Soulscar, to be defeated. Looking through the Burning Mirror, he learned that Kha-Beleth wanted to get Isabel, so with Shadya they marched through Sheogh to kill Veyer and save the Griffin Queen.

Later, Shadya and him joined Zehir, Godric and Findan to complete the Rite of True Nature. However, Shadya revealed to be Biara the whole time and took Isabel to Sheogh. The heroes went to Sheogh, defeated Kha-Beleth and saved Isabel. However, Zehir, Godric and Findan took Biara, disguised as Isabel, while Raelag searched and found the real Isabel and departed with her away from Sheogh.

After the fighting in Sheogh, Isabel and Raelag lived in the caverns of Ygg-Chall in peace. They were approached by Ylaya, who told them about Thralsai. Isabel and Raelag joined the fight against the Soulscar clan's members. When Ylaya defeated Thralsai, Raelag consulted with Tieru. Tieru ordered for Isabel's child to be found and tells him to start in the lands of the Orcs. Raelag went there and has not been seen since, though it is known that he has joined the Dragon Knights.

In Heroes V Raelag is a Warlock. As Agrael, he is a Demon Lord.

In Shades of Darkness, Raelag is a Darkblade. 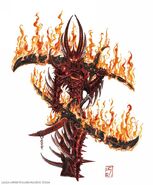 Raelag's portrait in Shades of Darkness 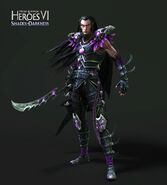 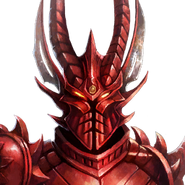 Agrael in Trial by Fire
Add a photo to this gallery
Retrieved from "https://mightandmagic.fandom.com/wiki/Raelag?oldid=150464"
Community content is available under CC-BY-SA unless otherwise noted.