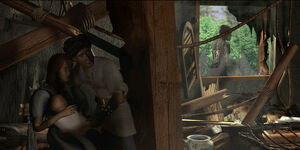 Adrienne the Fire Witch discovers a Death Knight is turning the local population into a harvesting ground for Undead. Restore to the land and hunt down this evil. Utter extermination of the undead plague is your ultimate goal.OffBck

Playing With Fire is the fifth campaign in Heroes of Might and Magic III: Armageddon's Blade and consists of three scenarios:

Adrienne, a fire witch of Tatalia, fights the undead who are invading her home lands. She learns that her enemies are led by Lord Haart, a former knight of Enroth who is now a death knight of Deyja. She vows to defeat him and free her homeland from the undead scourge.

Like most Armageddon's Blade campaigns, this campaign has a cut-out theme version.

Retrieved from "https://mightandmagic.fandom.com/wiki/Playing_with_Fire?oldid=147381"
Community content is available under CC-BY-SA unless otherwise noted.