This article is about the creature from Heroes of Might and Magic III. For other uses, see phoenix.

The phoenix is the upgrade of the firebird, the seventh-level creature of the Conflux in Heroes of Might and Magic III: Armageddon's Blade. It can be recruited from the upgraded pyre.

Firebirds are worldly manifestations of creatures from the elemental plane of fire. These magnificent beasts are as quick as fire itself and immune to spells of the same nature. Phoenixes, the more powerful incarnation of the Firebird, can resurrect some of its number from the ashes of its own demise.OffBck

The phoenix is the fastest unit in the game, and the rebirth ability will ensure a reinforcement of phoenixes, should the stack fall - 20% of original number of creatures. Much like the dragon creatures, its breath attack can hit creatures behind the attack target. In addition, its fire spell immunity is a nice addition. All in all, a very powerful unit. 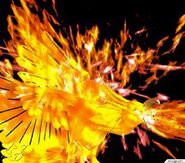