"If I do not return with a Tear of Asha, my king, it will only be because I have died in the effort. "
—Ossir, to High King Alaron [src]

Ossir is an experienced tracker and a prodigy with the bow, arguably the best shot in a nation famed for its talents in archery The respect he commands made him a natural choice when King Alaron was looking for officers, though Ossir would have preferred to remain in his beloved forests. All doubts were dispelled after his first battle, however, as his troops clearly benefited from his leadership.OffBck

Considered a prodigy with the bow, Ossir was unfortunately -- according to his tutors, anyway -- born with a restless and impatient nature. Instead of training, he spent most of his time exploring the lands of Irollan with his friend Sylrael, trying to uncover all kinds of secrets and mysteries. These years of adventuring have made him an experienced tracker and treasure hunter, but have also calmed his wild heart. He is now ready to train seriously, hoping to one day challenge the best shots of Irollan. OffBck

Ossir is a Ranger of the Sylvan faction. 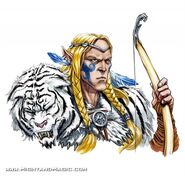 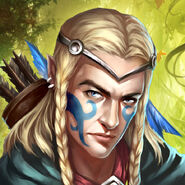 Ossir's prerelease portrait in Heroes VII
Add a photo to this gallery
Retrieved from "https://mightandmagic.fandom.com/wiki/Ossir?oldid=129339"
Community content is available under CC-BY-SA unless otherwise noted.