Orrin trained with one of Erathia's best siege tacticians during his early military service. Any archers under his command learn quickly to shoot at targets behind obstacles.OffBck

Orrin is a veteran of the former Erathian army, where he specialized in commanding sieges. He's an endlessly patient man who keeps in mind the lives of his troops first when he makes a combat decision. "Never waste a life needlessly," he often says. "And never act before you're ready!"OffBck

Orrin is a Knight. He starts with basic Leadership and Archery.

Homecoming: Orrin can be rescued from the prison.

Orrin is a knight. 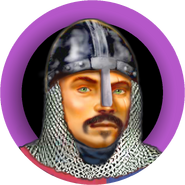