Ornella, as a human Knight (standard) and as a vampiric Necromancer (alternative)

Dead (as of Tribes of the East)

Lady Ornella is a campaign hero in Heroes V add-ons, Hammers of Fate, and Tribes of the East.

Lady Ornella is a high ranking member of the Bull Duchy, who controls the southeastern regions of the Griffin Empire. During Queen Isabel's War her proximity to Heresh and the Silver Cities brought her into frequent contact with leaders from those factions, particularly the Vampire Lord Giovanni. Allies and friends, she maintained contact with him even after the alliance between Isabel and Markal fell apart.OffBck

She used to be a young and beautiful woman and countess of the Bull Duchy of the Griffin Empire, but found interest in the arts of dark magic. With her friend, Lord Giovanni, she assaulted the mages of Silver Cities and the reward for her was the lessons of necromancy and became a worshipper of Asha.

Later, she was sent to unlock the portal of Iluma-nadin, a castle Giovanni would've presented to Arantir. However, she had to attack the city and cleanse it of demons, to which she succeeded. The breaking point of her faith had began, when her mentor Giovanni unsuccessfully assaulted Arantir, the Highlord of Heresh. The Highlord believed in her innocence and gave her the opportunity to prove her dedication to the Spider Goddess.

Previously a glamorous and sensual duchess of the Griffin Empire, Ornella's curious flirtation with the Necromancers has resulted in a cataclysmic change. Once a lively woman, she has now crossed over to the other side of existence. Under the stern eyes of Arantir, she must prove her worth to his cause, aid him in his war against the Demons, and find the powers and limits of her new form.OffBck

After her transformation into a vampire, she had aided her new mentor in his campaign against the demon cultists in Heresh and the Holy Griffin Empire lead by the demon lord Orlando. She has met her final death near the city of Flammschrein, where she sacrificed herself for the sake of a ritual needed to open a magical garrison. 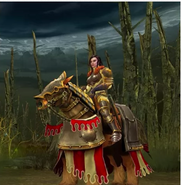 Ornella as a Knight
Add a photo to this gallery
Retrieved from "https://mightandmagic.fandom.com/wiki/Ornella?oldid=136308"
Community content is available under CC-BY-SA unless otherwise noted.