Alive (As of Heroes: VII)

Nolwenn na Feidh is a character in Might & Magic: Heroes VII.

Nolwenn is the daughter of the Duke of Stag, Seamus. Nolwenn is a kind woman who during her younger years was in a romantic relationship with the young Duke of Griffin, Ivan. This however did not last as Ivan's duties and the false rumors about him prevented her from advancing further in their relationship. After the death of Empress Meave Falcon and years later, during the Ten Year War, Seamus became the emperor, she noticed a strange change of behavior in her father.

Seamus was obsessed with becoming Emperor and when he finally achieved it, he was prone to moments of depression and outbursts of anger. At first she believed this behavior to be the, understandable, stress of her father's new responsibility. However, her father's behavior only gotten worse as when she attempted to appease her father, Seamus accused Nolwenn of conspiring against him. Nolwenn was pained to admit it but while she loved her father, she was growing fearful of him.

Instead of confronting her father any further, she escaped Horncrest to meet with Ivan, who is now Seamus' main rival for the imperial throne, in Talonguard and told him everything she knew about her father's plans, resolving to ally with Ivan to defeat her father.[1]

Nolwenn is a Paladin. 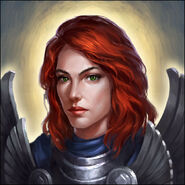 Nolwenn's prerelease portrait
Add a photo to this gallery

Retrieved from "https://mightandmagic.fandom.com/wiki/Nolwenn?oldid=112503"
Community content is available under CC-BY-SA unless otherwise noted.