Njam the Meddler is a character in Might and Magic IX. He is the God of Mischief, and the main enemy in the game.

Njam got on poorly with his fellow gods. Most of the gods refused to talk to him, and he rarely spent time in the Hall of the Gods. Krohn had foreseen that Njam would one day revolt against the gods, sparking off the Great Reckoning, and built Hallenhalt so that he could gather the finest warriors to fight on that fateful day.

Njam constructed an elaborate plan to imprison Krohn in the Tomb of a Thousand Terrors. When the gods were leaderless, Njam would take Fre as his wife and reshape the world to suit his whims. "Gone will be the days of being kind to the mortals. They will all be enslaved to serve me! Who, after all are the gods? Shouldn't the gods be in charge?"

To achieve his plan, Njam approached a Beldonian warlord named Tamur Leng and convinced him that he was fated to conquer the entire continent of Rysh. Later, Njam caused a ship of raiders from Chedian to crash on the Isle of Ashes. He talked to the surviving adventurers disguised as an old woman named "Yrsa the Troll", and told them that they were fated to unite the Chedian clans and stop Tamur Leng. Njam also made sure that Forad Darre accompanied the adventurers.

When the adventurers had united the clans and were getting ready for war, Njam appeared to them again as Yrsa and told them to win a prize at the Thing and give it to Bikki Yrsadotir in Thronheim City. The adventurers were reluctant to put the war on hold to deliver a circus prize, but they had promised to help Yrsa. Forad was left in charge, but the man was actually working for Tamur Leng, and deliberately led the entire Chedian army into an ambush.

When the adventurers learned that they had lost their army, they traveled to Arslegard to retrieve it, but the gatekeeper Hanndl refused to let them pass unless they could show a Writ of Fate. Njam appeared to them once again, this time in the guise of Igrid, one of the Wyrdes. He forced them to run an errand, then gave them a writ he had written himself, and the group entered Arslegard and spoke to the gods.

The adventurers raised their army and returned to fight Tamur Leng, but were surprised when Tamur Leng showed them his own writ, since it was impossible to have opposing fates in this manner. They were all summoned before Krohn, who recognized Njam's handiwork - just like Njam had foreseen. However, instead of dealing with Njam himself, which would have allowed Njam to lure him into a trap, Krohn sent Tamur Leng and the adventurers to deal with him. The group had no way of harming Njam, but they managed to imprison him in the Tomb of a Thousand Terrors, using the same freeze ray he'd intended to use on Krohn.

Njam the Meddler appears in Might and Magic IX.

Njam in his true form 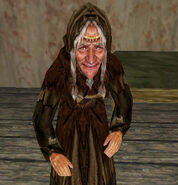 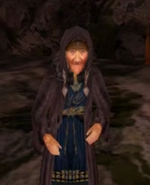 Njam imprisoned
Add a photo to this gallery
Retrieved from "https://mightandmagic.fandom.com/wiki/Njam?oldid=147605"
Community content is available under CC-BY-SA unless otherwise noted.