Ruler of the Kingdom of Enroth

1155 AS
As the son of King Roland Ironfist and Queen Catherine Gryphonheart, Nicolai Ironfist was the heir to the throne of the Kingdom of Enroth. First introduced in Might and Magic VI: The Mandate of Heaven, he is mentioned in subsequent games, and appears as a supporting character in Might and Magic IX.

The Prince of Enroth[]

Born in the kingdom of Enroth in August of 1155 AS to Roland Ironfist and Catherine Gryphonheart, Nicolai was named after his grandfather - Nicolas Gryphonheart, the King of Erathia. As the Prince of Enroth and heir to the throne, Nicolai seemed destined for a life of pleasure and nobility. However, he was often dissatisfied and distant, a prisoner within his own father's castle - forbidden from departing Castle Ironfist due to the dangers of the countryside.

In 1162, Roland departed for the northwest to seek out the missing Lord Kilburn. Instead, he found himself fighting the Kreegans, who had invaded the world that same year. Led by Xenofex, their ranks bolstered by the Kreegan Queen, the devils quickly overcame Roland's army with the aid of the traitor Sulman, despite an early victory for Enroth at Kriegspire. Roland was captured and later transported to Antagarich. Queen Catherine was left to rule the kingdom, and Nicolai was left apparently fatherless.

Almost three years later, Queen Catherine sailed for the south to attend the funeral of her father, who had been poisoned by a Deyjan spy (Lord Haart) to facilitate an invasion of Erathia from Deyja, Nighon, Kreegan Eeofol, Krewlod and Tatalia. With both rulers gone, Enroth was left in the hands of Regent Wilbur Humphrey and Nicolai himself, now only nine years old.

Nicolai played a small role in the destruction of the Kreegan Hive. When the Heroes of Enroth arrived at Castle Ironfist, Nicolai pleaded with them to take him to the Circus of the Sun. They agreed to do so, but he ran away to the Circus on his own, unknown to the four Heroes. While Humphrey's warriors scoured the continent for the missing Nicolai, all were denied entry to Ironfist. The Heroes themselves tracked down the Circus, locating the Prince and returning him to the Castle.

Later in their quest against the Kreegans, the Heroes returned to Ironfist under Melian's instructions, hoping to free Archibald Ironfist, Nicolai's uncle, from his petrification - Archibald's reward for usurping the throne during the Succession Wars. Archibald was the only person on the continent knowledgable of a spell capable of sealing away the Kreegan Hive - the Ritual of the Void. However, to free him, the Heroes required an artifact named the Third Eye, used by the Wizard Tanir to cast the curse upon Archibald on Roland's orders.

Nicolai knew the location of the Eye - it was hidden in the well of Castle Ironfist. With his help, the Heroes located the Eye and freed Archibald, who offered them the Ritual before departing to plot against the kingdom. When the Kreegan Hive was ultimately destroyed safely, Nicolai and Humphrey personally commended the four Heroes in a ceremony.

Over the following seven years, Roland and Catherine continued their campaigns against the Kreegans in Antagarich and Jadame. Nicolai, meanwhile, was left to rule Enroth, growing to further the quest in purging the remaining Kreegans from the land and leading attacks against them. In 1175, however, the Reckoning took place, destroying the kingdom. Nicolai's account was as follows: "I was in the courtyard of Castle Ironfist, talking with my general about how best to handle the devil problem, when the ground started shaking. This wasn't a normal earthquake, either. Something felt... wrong. The shaking got more violent, and the walls to the castle started falling down. I was buried under a mountain of rubble. I got hit in the head with something, and when I woke up, I was here. I can only assume that the devils took the capital city."

Though unbeknownst to himself, Nicolai had experienced and survived the Reckoning, arriving in Drangheim City, upon the world of Axeoth's continent of Rysh. Seemingly, he was unique: it appeared that all other survivors of the destruction, mainly those of Antagarich and Jadame, had ended up on the continent of Iranese.

The Saviours of Chedian encountered Nicolai a few weeks later. As natives of Axeoth, the Saviors could not understand much of Nicolai's story, having never heard of Roland Ironfist, Castle Ironfist, the Kreegans or Enroth. Taking him for a lunatic, they nevertheless heeded to his plea for assistance in raising money to fight the devils. Securing him a job working at the Circus at the Guberland Gathering, the Saviors continued their quest to unite the Chedians and defeat the Beldonian Horde.

Nicolai was planned to have a major role in Might and Magic X, which was to take place in Beldonia. He was also supposed to be a playable hero in the third book of Legends of the Ancients, a Ubisoft-approved fan campaign for Heroes of Might and Magic V which continues the storylines of Axeoth. 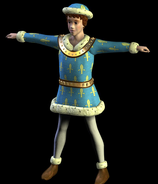