Nicolai, as a human and as a vampire

Emperor of the Holy Griffin Empire

Nicolai Griffin is a non-playable hero in Heroes of Might and Magic V.

Initially introduced as a typically dutiful defender of the realm, he is ultimately murdered at the hands of Agrael. Eventually, he is re-animated as a vampire by Markal, transformed into the moral opposite of his original, living self.

Nicolai is the king of The Holy Griffin Empire.OffBck

Nicolai was the only child of the Emperor Alexei Griffin and Empress Fiona Unicorn. After his father's death in Sheogh during the War of the Fifth Eclipse, his uncle Godric took over the responsibility to prepare the young prince for his future as the Emperor of the Holy Griffin Empire. Nicolai grew up to be an intelligent and capable emperor, becoming master of warfare, leadership and light magic. He preferred to fight on foot with shield and sword instead of on horseback with lances, and was an inspiration to infantry soldiers under his command.

His wedding with Isabel Greyhound was interrupted by a Demon siege of Talonguard, which marked the beginning of the War of the Sixth Eclipse, later known as Queen Isabel's War. Nicolai and Imperial armies managed to hold off the Demon invasion. However, during his confrontation with the Demon Lord Agrael, Nicolai was mortally wounded with a magical Demon weapon, which prevented his resurrection by Archangels. In his last moments, Nicolai demanded Godric to promise him that Isabel would succeed him and rule in his place.

Nicolai's dead body was brought to the Halls of Heroes to rest with other Griffin rulers and heroes. His soul has since abandoned his body to spend its the afterlife in Elrath's realm. It was however summoned back to the realm of living by Markal, who resurrected him as a vampire through the Rite of the Night.

Unable to feel his former love or passion, he was angered, starting to see his once beloved Isabel as a lifeforce to feed on.

He then led an undead army to Irollan, continuing Griffin Empire's war with the elves, started by Markal and his bride.

Defeated by the elven Ranger Findan, his soul was sent to its afterlife for the final time, uncertain however of its fate.

Before being raised as a Vampire, Nicolai was a Knight. Afterwards, he is a Necromancer.

Nicolai appears in Heroes of Might and Magic V and is mentioned in Hammers of Fate, Tribes of the East and Clash of Heroes. 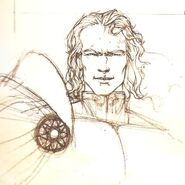 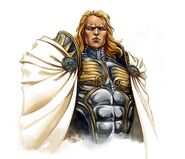 Nicolai's artwork as a Knight

Nicolai's artwork as a Vampire

Nicolai, in the intro

Nicolai's portrait as a Knight

Nicolai's vampire model
Add a photo to this gallery
Retrieved from "https://mightandmagic.fandom.com/wiki/Nicolai_(Ashan)?oldid=154255"
Community content is available under CC-BY-SA unless otherwise noted.