Legion of the Fallen, The Kreegan Hives

Master of the Legion of the Fallen

Over a hundred years before Crusaders of Might and Magic

"Don't be sentimental, mortal. This war is bigger than any village. The very power of the Elder Races hangs in the balance, a power that only I will possess."
—Necros to Drake

Necros is the primary antagonist of Crusaders of Might and Magic, and is mentioned in Might and Magic: The Sea of Mist. He is an ambitious and formidable Necromancer who seeks to tap into the power of the Ancients and the Kreegans. Though not actually undead, he is the creator and master of the Legion of the Fallen, and is believed to be physically invincible.

Necros is mentioned in Might and Magic: The Sea of Mist, where it is revealed that he is engaged in a fight with a being known as the "Great Dragon". Necros felt that, since Soronne and the Six Shards were created by the great dragons, there would likely be many sources of power to draw from. He altered the course of the Sea of Mist and sent Sendark to take the towers of the Magistracy of Soronne, so that he could use their power in his fight.

Sendark pretended to work for Necros, but told Maven that he was actually working for himself - it just so happened that his plans overlapped with the dark lord's. He believed that handing the towers over to Necros would bring him one step closer to godhood, which would allow him to finally face Necros as an equal, instead of as a discarded lackey. 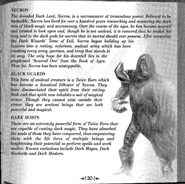