For the faction in other games, see Necropolis.

Heresh
Necropolis is a faction of undead who worship the Spider Goddess, an aspect of Asha.

Necromancers began as a splinter sect of the Wizards in 461 YSD, and grew into a powerful nation after the discovery of the Mother Namtaru (the Spider Goddess), who is a manifestation of one of the aspects of Asha - the “Death” aspect. Their interpretation of the Goddess’s darkest aspect is fanatical, emphasizing death alone and exalting the state of unlife to which all Necromancers aspire. 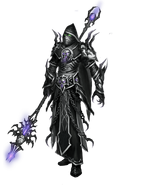