Generally stoic, Sir Mullich is prone to spasmodic fits of uncoordinated excitement believed to intimidate his troops into working faster.OffBck

Mullich is a stoic, disciplined leader who keeps a keen eye on everyone under his command. He is highly respected for his experience and ability to encourage each man to perform beyond even their own expectations. But when he joins his men in a tavern, his quirks become all too apparent after a tankard or two.OffBck

Sir Mullich is a Knight. He starts with advanced Leadership.

Sir Mullich is a knight. 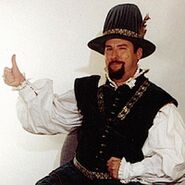 David Mullich as Preston Steel in Might and Magic VI