Edit
watch 02:23
Wiki Targeted (Games)
Do you like this video?
Play Sound

This article is about the creature from Heroes VI. For other uses, see minotaur guard.

The minotaur guard is a creature in the Shades of Darkness expansion to Might & Magic: Heroes VI. An Elite creature of the Dungeon faction, it is the upgraded version of the minotaur.

The Crimson Wizards of Al-Rubit, in a diplomatic gesture that surprised many and angered their neighbours in the Silver Cities, made a gift of one thousand loyal Minotaurs to the Dark Elves. In a short period of time, the Minotaurs took oaths of loyalty to the Dark Elves and Malassa. The Dark Elves that appreciated their strength and loyalty gave them freedom instead of using them as slaves. Both sides have benefitted from this new friendship since.OffBck

The minotaur guard is the Dungeon creature of choice for long, heavily melee combats. With its high hit points, might defense, and the finest morale of any Dungeon unit, the minotaur guard is built to outlast enemy melee combatants. His Preemptive Strike ability will deny enemy melee units the chance to attack without first being attacked themselves, bar those that attack without retaliation. This effect can be made even better through the Counterstrike ability tree, increasing the damage dealt by retaliation strikes and letting the minotaur perform more of them. It behooves the minotaur guard to attack his opponents early and often, triggering his Fighting Spirit ability and further increasing his chance of gaining a morale bonus. Mighty Slash is best saved for when the faction ability needs points, or when a small creature needs pushed back to protect the ranged and skirmishing units of the faction.

When besieging enemy towns, the minotaur guard is the ideal creature to be in front pounding on the gate. Its attacks will remove 2 structural points from whatever wall or gate it's attacking, and attacking will trigger his Fighting Spirit ability, giving him Morale so that he can attack more and destroy the gate even faster. When the minotaur guard's army is the subject of a siege, the minotaur guard should take the role of defender, dealing with enemies that get inside and plugging holes in the walls to act as a physical wall against the enemy.

When fighting minotaur guard, striking to avoid their retaliation effect is key. Ranged attackers, units that attack without retaliation, and special abilities are all very useful in whittling down the minotaur guard' numbers without triggering the potentially deadly retaliation strike. As they are fairly slow, most armies should be able to reduce their numbers significantly before they reach melee. Take care when engaging in direct melee with these creatures. 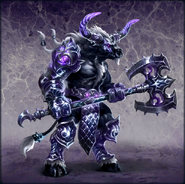 Artwork of the minotaur guard.

Mighty Slash in use.
Русский
Community content is available under CC-BY-SA unless otherwise noted.